This article is about the people native in Old Vailia and Vailian Republics. For language, see Vailian Language. 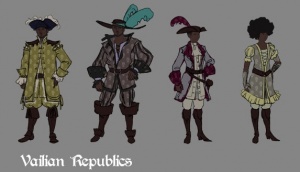 humans from the Vailian Republics

The Vailians are people native to the Vailian Republics. Ethnic Vailians (humans and a small number of dwarves) have dark brown skin and tightly spiraled, dark brown hair. They most commonly have brown or black eyes, but occasionally have green, hazel, or grey eyes. Vailians are widely known to be skilled seafarers,[1] and they pride themselves on their well-made and intricately-decorated clothing, often made with rare materials and dyes to which they have easy access.[2] Vailian dwarven men often grow beards.[3]