As part of the Unified Community Platform project, this wiki and 38 others will be migrated to the new platform, with migrations beginning September 23rd at 7am CDT. Minimal changes are expected as part of this migration. Read more here. 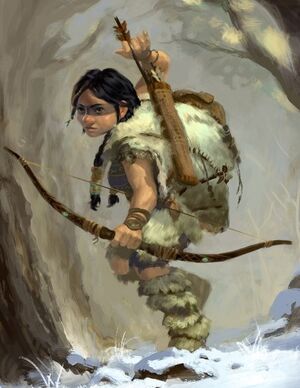 The Race of a creature is a classification according to similar traits. A diverse medley of races populate Eora. Their separating characteristics are more apparent on a cultural level, with racial boundaries presenting neither roadblocks nor advantages in any given dealing between civilized men and women.

Within the Kith, or the civilized races, there is a variety of ethnic subtypes and nationalities. The world's races did not all spring forth from the same place, and millennia of independent development have resulted in distinctive and unconnected groups, typically exhibits slight differences in appearance, outlook, and adaptation compared to other members of the race. For example, the dwarf ranger pictured to the right, is originally from a southern boreal region that is quite different from the temperate homes of her distant kin to the north.[1]

Additionally, Eora contains some isolated races and ethnicities, but transoceanic exploration and cultural cohabitation have heavily mixed many racial and ethnic groups over time. This mixing is not always... peaceful. At times it has degenerated into genocide and long-standing prejudices are ingrained in many cultures.[1]

Races differ from each other physiological[1], sexual pairings by different races (e.g. elves and humans, orlans and elves) never result in conception.[2] But inter race unions such as Aedyr Haemneg are possible.

In Pillars of Eternity, there are six playable races, or Kith, as the civilized races are referred to. As a new player, you will be able to start off as any of these races and their subdivisions.