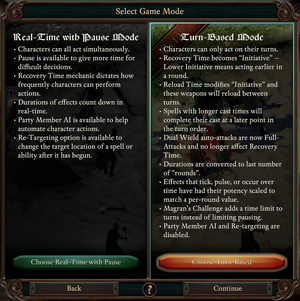 A summary of turn-based combat in game

Turn-based mode is an alternate mode of combat in Pillars of Eternity II: Deadfire. It reworks the games existing combat mechanics to function in a turn-based style of play (like that of Divinity: Original Sin, for example) instead of one that is real-time as the game is more traditionally known. This changes the approach and pacing of combat to be more slow, tactical, and deliberate, drastically affecting how the game is played. It aims to provide players with the choice of an alternate combat style for those who may prefer it.

Once starting a new game, the player is free to pick between the traditional "Real-Time with Pause Mode", and the new "Turn-Based Mode". As it changes the game fundamentally, players cannot freely swap between the two modes during gameplay (without using the console).

The mode was temporarily made available to players in late December 2018 [1], though it was revealed that this was unintentional, and it was removed in a hotfix some hours later.

On the 24th of January 2019, Obsidian released a beta version of the game mode for players to test and give feedback on until the end of February, presumably the release date. It was rumored that the addition of this combat mode was to coincide with the release of the console versions of Pillars of Eternity II: Deadfire, in order to make the combat more accessible – given Pillars of Eternity's combat has traditionally favored the use of keyboard and mouse.

A beta of the mode was introduced in patch 4.1, which allowed players to give feedback and report bugs with the new system before its full release.

As of patch 5.0 (released on the 8th of May, 2019), turn-based mode is no longer considered to be "in beta". The patch added a variety of fixes and changes as a result of feedback from testers.

Instead of all characters being free to take actions simultaneously, turn-based combat restricts the focus to one character at a time. Combat is taken in turn, with all combatants taking one turn each round. The combatants are queued based on their Recovery Time - now called "Initiative". Lower Initiative means acting earlier in the round, higher means acting later. Characters can only act (i.e. move, attack, and cast spells and abilities) during their turns. Once a character has taken their turn, the next character in the queue gets to move, and so on.

While the update doesn't change a lot of the actual health and damage mechanics of the game, it does change the effect of durations and over-time effects, converting them to last a number of rounds. This includes the regular tick, pulse and over-time effects, but also spell cast times and reloading. Generally, one round is equivalent to six seconds in real time, though some exceptions have been made for balance reasons.

The following is the comparison shown to the player starting a new game:

The Delay Turn button moves a character to the end of the turn order in a round of combat. It can only be used if the character has not moved nor used their action point for that turn.

In addition to the differences summarized above, several other mechanics have been altered for balance purposes.