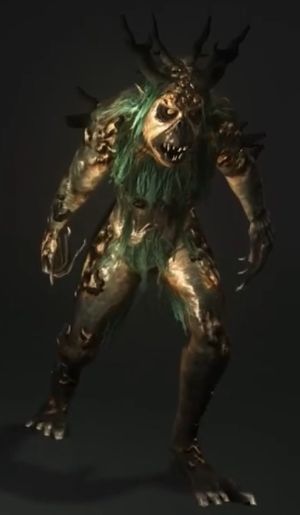 Ingame model of a Troll.

Trolls are a race of creatures in Pillars of Eternity.

They are vulnerable to both Burn and Corrode.[1] Trolls rely more on the very high base damage of their insane claws than on being smarty about where they land blows.

These gangly giants stand twice the height of average humans. Their bodies are covered in large, fungal growths which leak foul-smelling, pus-like fluid. Their oversized hands and feet extend to giant claws capable of rending a man in two. Dozens of slimy tendrils hang loosely from atop their oversized head, and their vast maws are filled with jagged, razor-sharp teeth. Trolls have long faces, long chins, long noses, and tangled masses of wiry, fungus-infected hair on the tops of their heads. They never use weapons, and don’t even wear hides.

Looking at a troll, it can be difficult to tell whether they’ve evolved in harmony with lichen, moss, and fungi, or whether they’ve been overtaken by them. A troll’s naturally clammy flesh provides the ideal growing environment for these plants. They provide camouflage as well as some protection from the elements, and the enzymes they produce also offer limited sustenance for trolls in lean times.

Because of their symbiosis with these plants, trolls generally dwell in heavily-wooded areas, although some may occasionally be seen in damp underground environments that also house an abundance of lichens and fungi.