From Pillars of Eternity Wiki
(Redirected from Tool)
Jump to: navigation, search 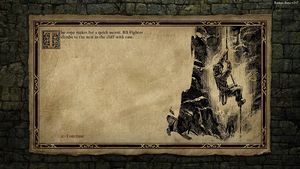 Scripted interactions are story sequences told through the use of on-screen text descriptions, illustrations, and sounds. They are used to emphasize events, and offer different choices to solve an event outside the typical realms of combat and person-to-person dialogue. The options often require character attribute and skill checks e.g. Physical options like lifting something with a strength stat or stealing with dexterity. [1][2][3] These checks are sometimes for the character interacting with the scene, and other times for the whole party. Characters can become injured, or in some cases killed by being below the threshold of an attribute or skill check in a scripted interaction. [3]

In some interactions you can use an item to get what you want. Those items are consumed if they are used and can either make a skill check easier or are needed to get the best result. You can either find them in the world or buy them. Other times you can use quest items like keys in scripted interactions. Known items: