The Final Act is a side quest in Pillars of Eternity.

Kurren, a Dunryd Row cipher, needs aid in looking into some disappearances that he's too busy to investigate. Kurren suspects that animancers are behind it, and he wants the Watcher to resolve the matter by any means they can can. Kurren knows about three recent missing individuals and the individuals who reported the disappearances. Oly, Lora, and Elcga might be worth talking to.

If you enter Hadret House in Brackenbury and head into the war room, you'll find detective Kurren. Ask him if he needs your help, and if you already have gained Lady Webb's confidence he'll mention a few unsolved missing persons cases. Keep asking about the cases to learn that Kurren believes all three are connected. Tell him you'll look into it, and continue to ask for details to learn that you should question three potential witnesses.

Go and talk to all three of them, it doesn't matter in which order:

All of this information incriminates Lumdala, leader of the Revel of Stars acting troupe, who stands next to the amphitheater in Copperlane. If you want, you can confront her after questioning only one or two of the witnesses, but she will just discredit their testimony and make excuses. If Aloth or Grieving Mother are in your party, they'll advise you not to trust this woman, but nonetheless the quest won't progress until you've learned the incriminating information from all three witnesses.

After having collected all the witness's information, head to the amphitheater in Copperlane and speak with Lumdala. She'll still deny her involvement and dare you to prove it, but her associate Kadal – who overheard everything – is much less resolute. If you were Passionate in your accusation against Lumdala, she excuses herself and leaves you to speak with Kadal; otherwise he discretely approaches you. Either way, Kadal ends up speaking to you, and asks you to meet him at Lumdala's House.

Lumdala's House is located near the north gate of Copperlane. Enter it and chat with Kadal, and he will make a confession and give you the Rusty Bronze Key which opens the door to the room behind you. You can now choose to let Kadal go or end his life, then enter the room and find a staircase that leads to a hidden theater inside the Copperlane Catacombs. 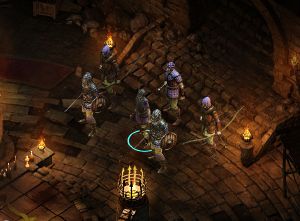 Inside, look for a scarf on the stage. You can pick it up, which connects yours and a soul attached to it. It turns out that it belonged to Kora – one of the missing persons –, and that she was murdered here in a gruesome snuff film-like theater production, organized by Lumdala for an audience of rich people.

Enters the latter – now fully armed –, accompanied by a band of thugs, and initiates conversation. You have three options:

Head back to Brackenbury and take your decision, how this play should end.

If you learned about Lord Gaderman, you might want to confront him, hearing his story. Find him in Brackenbury next to the statue by the Charred Barrel. You can:

Head back to Kurren at Hadret House and deliver your report. No matter how you bargained with Lumdala and if or if not you've spoken with Gaderman, there's no getting round incriminating someone:

If you decide to frame Linete Reymont, but went to her house and killed her before reporting to Kurren, he will give you slightly different dialog. However, there's no benefit to this (outside of role-playing), and killing her will have a negative effect on your reputation. Additionally, there isn't even an option to talk with her or her father about the matter, which could lead to a fight – you'd simply have to attack her.

Regardless of who you chose to report or frame, Kurren will honor the outcome of your investigations, and you receive a Moderate reputation increase with Defiance Bay. Additionally he offers a monetary reward, which depends on your response:

And that concludes the quest.

If you want, you can go back and tell the three witnesses, their respective friends and loved ones are dead, but this has no effect other than giving you some more opportunities of dialog choices that shape your personal reputation.