The Disappointer is a unique pistol in Pillars of Eternity. 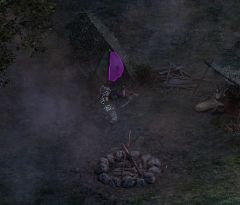 The hidden "container" with the pistol in the encampment

Coming from the caravan's encampment and across the river, the player character will discover a small abandoned camp, just north of where Sparfel's pack can be found during the second stage of A Moment's Respite. The stash has a difficulty of 0, so if you have less than 4 Mechanics, it can only be revealed in Scouting Mode.

If the Watcher cannot reveal the hidden stash, or if it is missed, the Disappointer can later be found on a corpse behind the Adra Dragon in the deepest level of the Endless Paths of Od Nua (only appears if the Watcher didn't take the weapon from the hidden stash in the encampment).