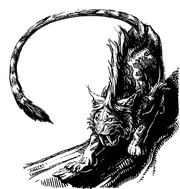 Bestiary image of a stelgaer

Stelgaer are a race of creatures in Pillars of Eternity. They are the dominant big cat in Eir Glanfath and the Dyrwood. Stelgaer have a tiger-like build, lion-like mane and tail, "sabre" teeth, and a dark spotted coat.[1] They form prides, but may be found hunting alone or in groups.

Stelgaers are large predatory cats. While juveniles are often lone hunters, mature stelgaers will often band together in prides to defend territory, hunt prey, and care for their young. These cats are aggressive and highly adaptable, and particular strains of the species may be found in a range of environments, from hot plains to frozen tundra. Kith settlements have pushed them out of most of the territory around Defiance Bay. As a result, they are more common in Eir Glanfath. Their status as a deadly predator makes them a noteworthy trophy among followers of Galawain.