Different variants of a spider 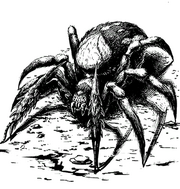 Bestiary image of a Spider

Spider are a race of creatures in Pillars of Eternity.[1]

Enormous and hostile spiders come in a terrifying array of shapes, colors, and sizes throughout the Eastern Reach. Much more aggressive than their tiny kin, these giants actively seek out human and animal prey. Even the weakest of them, the spear spider, can easily kill a grown kith if the victim is unprepared. Though the spear spider lacks a poisonous bite, its piercing legs, from which its name is derived, can inflict terrible wounds, even through armor.

More deadly than spear spiders are ivory spinners and widowmakers, both species possessing horrific poisonous bites. The ivory spider also has the ability to shoot webs that can slow down its prey. Widowmakers do not cast webs, but their poison is extraordinarily toxic.

Seldom seen outside of the most remote locations in Eir Glanfath, the fabled crystal-eaters are enormous and powerful, possessing magical abilities some wizards believe have been developed through the consumption of adra and enchanted gemstones. In addition to their ability to raise a field of deadly crystal spikes, the venom of a crystal-eater will temporarily turn a victim's flesh and blood to stone. Subsequent attacks by the crystal-eater on a petrified foe are quickly fatal.