From Pillars of Eternity Wiki
(Redirected from Soulbound item)
Jump to: navigation, search

Soulbound items are a special class of weapons, armors, shields. They were first introduced in The White March - Part I, and exist in Pillars of Eternity II: Deadfire as well as its expansions. 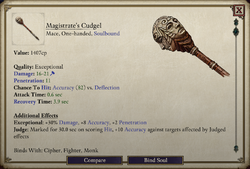 The soulbound item interface in Pillars of Eternity II: Deadfire. Same as the regular interface, but adds a Bind Soul button and artwork.
Below the effects (out of view) is a list of requirements to upgrade the item

Soulbound items are unique items that can magically bond with the soul of a single character. Once bound, the weapon can only be used by that character unless the bond is severed. A soulbound item will increase in power as the wielder completes certain requirements specified in the item's description. Most soulbound items can only be bound to characters of certain classes.

Soulbound items cannot be enchanted by the player, instead they are leveled up in multiple stages after they've been bound. Each new level grants more enchantments and background information about the item. Leveling up is done by completing specific goals - such as killing or dealing damage to a certain type of enemy with the soulbound weapon. The upgrades that are applied by leveling up the item can only be used by the character it's bound to. The goals required to level up the item, as well as the specific upgrades to the item can differ depending on the soulbound character's class. If the bond is severed, the item reverts to its original unleveled state.

In Pillars of Eternity (but not Pillars of Eternity II: Deadfire), regardless of the item's type, a soulbound item always qualifies for any Talents or Abilities like Weapon Focus and Specialization that the character may have. E.g. if a fighter has Weapon Focus and Specialization in Ruffian, he or she would gain their benefits even when wielding a soulbound great sword or wand. Benefits from multiple Talents or Abilities of the same type (e.g. Weapon Focus Ruffian and Peasant) do not stack. If the bond to a soulbound item is ever severed, it will lose all of the abilities it has gained over time and any new owner will need to gain them the normal way.

The in-game description of soulbound items is gradually revealed as it is upgrades. The description starts as a single paragraph, and a new one is added each time the item is upgraded.

They have a larger information window that includes a pen and ink style illustration of the item.