He can be found blocking the main entrance to the Clîaban Rilag ruins.

A man stands before you, his face smeared with green and ochre dyes. Hides and furs cover his body, and he holds a spear in one hand. He's the leader of a hunting party of the Three-Tusk Stelgaer, one of the Glanfathan tribes.

Currently he is tracking a party of Leaden Key agents who have entered the Clîaban Rilag ruins, which is considered a sacrilege punishable by death in Glanfathan law. He won't follow them inside the ruins, but he expects them to have to come back out at some point, so he's waiting at the entrance. Little does he know that the Leaden key agents have sacrificed themselves to an Engwithan soul-stealing machine inside the ruins. 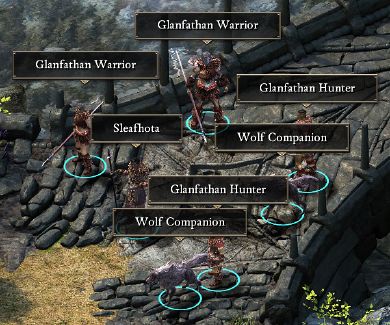