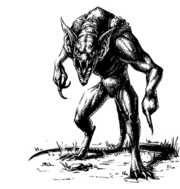 Bestiary image of an skuldr

Skuldr are a race of creatures in Pillars of Eternity. Skuldr have poor vision, but they use a form of echolocation to perceive the spirit world. This allows them to “see” souls, making it difficult to use stealth to avoid them.[1]

Skuldrs are large, mammalian creatures that dwell in caves in total or near-total darkness. As a result, they have poor vision and rely on their sense of hearing to navigate and find prey. The protrusions and hairs on their ears allow them to detect airflow, which is key to telling direction in an underground environment. They communicate through screeches and clicks, and use these vocalizations in a form of echolocation. They are communal creatures, and will nest and raise young together.