From Pillars of Eternity Wiki
Jump to: navigation, search
Main article: The Defiant 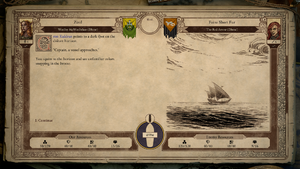 The beginning of combat.

Ship combat is the essence of sailing in the Deadfire. Whether it's slaver scum, the Principi, or the Rauataians, you will have to confront enemy ships in battle on the open seas and defeat them - for experience, profit, and satisfaction.

Ship encounters are started on the world map, once two ships come into contact. If the ship is hostile, you can transition to combat, close to board, or flee.

Patch 5.0.0 introduced a number of changes to the ship engagement UI. Prior to the patch, this occurred in a scripted interaction panel. Now it occurs directly on the map screen, and is extended depending whether you are in pursuit or being pursued, adding the ability to intimidate the enemy.

Opens the trade window with the ship (only for merchant and slaver vessels).

Leave the opponent be, exiting the pursuit window.

See below for information regarding flee chance. Successfully fleeing removes the enemy from the world map for a duration. Failing to flee starts ship combat at a initial dual distance of 300.

You must pay a portion of your resources (money, food, drink, medicine, ammo, repair). Succeeds regardless of if you actually have the available resources or not. Prior to patch 5.0.0, surrendering was forced if you lacked a crew (regardless of if the opponent was hostile or not) - rejecting surrender immediately triggered a game over. Surrendering will lose you:

There are two primary factors to consider when choosing whether to fight to run:

Should you choose to flee from a pursuing ship (either at engagement, or during combat) your chance to flee is calculated using:

The formula is then:

A roll between 0 and 1 is made, and if the result is <= the chance, the attempt to flee succeeds.

If your ship is the Rauatai submarine, fleeing is guaranteed (prior to patch 5.0.0, this was not the case).

You cannot flee if your current and maximum sail health is zero.

Intimidating a ship in pursuit is not based on random chance, unlike fleeing. It is determined using:

The formula is then:

In order to successfully intimidate, the resulting value must be greater than 0.

Unlike regular combat, fights between ships are resolved in a turn based system. Ships start a good distance away from each other (typically a few hundred meters) and the captains decide what action to take.

Both ships have 3 turns each round. At the start of each round, one ship wins the Advantage at random. The roll is modified by each captain's rank and the ship's combat speed. The ship with Advantage acts first for the round, has increased cannon range, and 50% bonus movement speed.

Each turn is divided into a few possible actions. These are:

Cannons are fired in groups, based on the side of the ship they occupy (port, starboard, aft and fore). Cannons may only be fired if they are pointing at the enemy, and are manned by a crew member. Each gun requires 1 ammunition to fire per shot, and can be loaded with 3 types of ammunition:

Fire-based weapons (such as the Wyrmtongue and Magranite Firethrower) are their own type, and will not change even if you choose another type of shot. They have an equally split chance of dealing damage to the hull and sails, as well as the above deck and below deck crews.

If hit, your attack will cause one of these damage types:

This can be used to reassign your crew. Use this action to treat your crew injuries or deal with Ship duel events. Note that assigning ship duel events to your crew makes them unavailable, but their post is unchanged.

After combat ends, your reassignment will still be in effect. At which point:

Your crew may be injured during combat. Injured crew cannot take any action. For example, if your cannoneer is injured, you won't be able to fire the cannon they're in charge of.

Use "Report to..." action to move them to resting area. You'll need a surgeon to treat your crew injuries.

Crew injuries remain after combat and take several days or arriving at port to heal. The treatment during combat is only emergency treatment so that they can return to work.

During ship combat, a number of events can occur as a result of being critically hit by an opposing ships cannon fire. These events often cause immediate (or per turn) sail damage, hull damage, crew damage or resource loss, and have to be resolved over a certain amount of turns, otherwise your ship will continue be negatively affected. Resolving an event simply means transferring available crew away from their stations to the event in order to address the issue. This can be done with the "Report to..." action. The more crew members that are assigned to the event, the faster it will be resolved. Multiple events can be applied to the ship, but some events will supersede others.

Every cannon hit has a chance of being a critical hit, and therefore triggering an event. The crit chance is solely determined by the rank of the Cannoneer manned to the cannon being fired. Fire weapons do not increase your crit chance, but they do make fires more likely when crits happen. See Ship crew - Job rank bonuses for more info.

All events have a crew capacity of 4, that is, the amount of crew members that can be assigned to deal with the event.

Combat can come to a conclusion in a few different ways:

At the beginning, you won't have much money, so you'll have to deck out your ship with rewards from quests:

This build focuses on minimizing cost while allowing you to complete ship bounties.

It is possible to complete Bounty - Rock-Stomper Rodul with minimum build but you'll want to train your cannoneers by defeating the easier targets first.

Note that this build specializes in taking down bigger ship: Dhow, Galleon, Junk, especially Dhow. It has harder times taking down Voyager and even if you win, the booty is not so good. You'll want to hunt down Dhow for some better booty. The water around Crookspur has a lot of aggressive slaver ships.

The minimum cost for this build is

Versus Voyager or Longship.

Versus other ship types.

Versus Fyrgist's ship - The Heaving Harlot. This Junk's decked out with powerful cannons and manned by high level crew. It can be a challenging combat. You'll want your crew at maximum possible rank and some luck.