Rathun are a Pillars of Eternity II: Deadfire faction.

An isolated and extremely hostile race, not much is known of the Rathun who guard a chain of islands named Magran's Teeth. These fire giants are fiercely devoted to the goddess of war, and some believe it was Magran herself who formed them from Eora's soil and her own flames. Self-proclaimed champions of the goddess, they will fight to the death rather than submit to any kith. If ever you spy one of their longboats on the open sea, about face and sail full tilt away. The Rathun prefer to take a ship's crew alive so that they may be sacrificed to the Ancient in the volcano.

The Rathun are no random creation of magic, but a tool deliberately created by Magran. Crafted in mud kilns, the Rathun were formed to ward against kith in order to safeguard Ukaizo - and they are entirely expendable insofar the goddess is concerned. 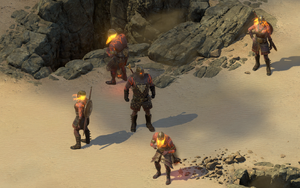 A group of warriors

The Rathun are led by their high priestess, the brenthís, one of the few among the sect of warriors with the ability to hear Magran's voice.

Rathun are invariably hostile to all who trespass upon the waters of Magran's Teeth.