From Pillars of Eternity Wiki
(Redirected from Pride)
Jump to: navigation, search 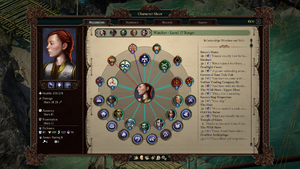 The reputation tab in the character sheet window. The lower, inner semicircle represents player-companion relationships. The list on the right shows the history of relationship changes for the hovered character.

Companion relationship (also known as Companion reputation, attitude, or simply relationship) is a system in Pillars of Eternity II: Deadfire that represents a companions attitude and view towards the player and other companions in the party. A relationship is primarily affected by the reactions that a character has to certain dialogue cues from other party members. This system draws parallels with the faction reputation system - which encompasses the player's (and by extension the party's) standing with groups of people, and the disposition system - encompassing how other, non-companion characters view the player.

A relationship between two characters is influenced by the actions and dialogue expressed between both parties.

All companions (but not sidekicks) have pre-defined conversational topics that resonate with their core beliefs. When these topics are brought up, by either yourself - but more often when other companions interject in conversation, it "triggers" a change in relationship towards the other party, either increasing or decreasing their current relationship score with that character depending on their approval or disapproval of the topic in question.

In addition to topic-triggered changes, some companions have fixed changes that are associated with making certain decisions during the game. For example in the quest Hunting Season, the player has to choose between siding with a group of godlike druids, or the RDC who have invaded their island. Choosing to side with the druids will always give a set negative change in relationship with Maia Rua, skipping any topic-related checks. However, this only ever happens if she is in the party and is there to witness it. Each event such as this has the option to apply only if the companion is active in the party, with some taking effect even if they are not.

Because of this, companion relationships are extremely situational and are greatly influenced by what each party member witnesses and the dialogue options they are exposed to. Composing your party in a way that minimizes exposure of opposing traits and topics, and maximizes exposure to common traits, is key to ensuring that fellow party members get along. The things that companions say or do cannot always be foreseen, so inter-party relationships can be somewhat unpredictable.

Technically speaking, the player does not keep a relationship with companions at all - only from the companion to the player (otherwise this would be a contradiction to the Featureless Protagonist model). Because of this, player–companion relationships can be viewed as mutual and non-directional (i.e. how the player and a companion feel about each other).

How it works[edit | edit source]

Whenever an event occurs in conversation that is associated with a topic, all active party members are polled for reactivity with the speaker (be it the player, or another companion). If the companion has a reaction to the topic, the relationship between the speaker and that companion is modified to suit.

All topic relationship changes are done using the command TriggerTopic.

Every topic relationship-altering event is assigned the topic itself, and a changeStrength, which is used as base delta for the relationship change. This can be interpreted as the speakers own strength of feelings towards the topic. Internally this is the RelationshipValue property of one of the three ChangeStrengthGameData classes. The strengths are Minor (4), Average (4), and Major (8).

Every topic has its own topicValue, which represents a unified effect that the topic has on people and society. More controversial, polarizing, or greater affecting topics have a higher value, while less serious topics have a lower value. Most topics have a value of 4, though they are listed below.

A weight, and an axis is assigned alongside every companion's react-able topics (in CompanionGameData). The axis is whether the reaction to a topic is a negative or positive one, and the weight can be interpreted as the characters strength of feelings towards the topic. Possible weights are Weak (x1 i.e. no multiplier) or Strong (x2 i.e. double). These are shown in Companion topics table below.

If the axis is positive, it is added to the current score, otherwise it is subtracted.

Direct relationship changes are - as the name suggests - more straightforward than topic changes. They can only ever be directed at a single companion, and simply have:

All direct relationship changes are done using the command CompanionAddRelationship