From Pillars of Eternity Wiki
(Redirected from Príncipi)
Jump to: navigation, search

Príncipi sen Patrena (Vailian: Princes without a Homeland) is a Pillars of Eternity II: Deadfire faction.

Responding to the collapse of Grand Vailia (2720 - 2760 AI ), noble families packed up their households and sailed abroad seeking opportunities away from the shadow of their homeland. Over time their old world traditions evolved into a new identity as the Príncipi sen Patrena - the Princes without a Homeland, a loosely-connected and regulated organization of pirates.[1]

They sailed around the Eastern Reach until they reached Deadfire, where instead of settling the islands, they continued their shipboard life. Seizing opportunities where they could, they gradually became pirates, smugglers, mercenaries, and merchants of ill repute. The process was a result of the unraveling of the diminishing empire's trade routes, with the remnants seized aggressively by Rauatai and the Vailian Republics. The exiled families of Vailia found themselves faced with poverty. In response, they resorted to the aforementioned piracy and crime. However, in so doing, they also evolved a shared sense of belonging, a common identity that abandoned the ancient class divisions of Vailian in favor of a single, united people without a homeland: The princes.[2]

The first families initially landed toward the warm, northern portion of the archipelago, but the Príncipi have expanded their reach since then, and their ships can be found anywhere in Deadfire. They tend to lurk near trade routes and settled areas, though their havens are necessarily more remote. While the Príncipi do not found formal cities, they have semi-permanent colonies all around the archipelago where members may safely land for repairs, R&R, or to purchase new supplies. The locations of these havens are typically known only members (or extremely close associates) of the Príncipi.[3] Over time, their ranks have swelled to include Deadfire's indigenous peoples (Huana) as well as enterprising or desperate individuals from other countries and cultures not aligned with the Republics or Rauatai (Dyrwood, Aedyr, Readceras, Ixamitl, etc.)[3] 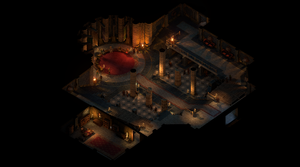 The seat of power of the Principi, at Balefire Beacon.

The Principi are a loosely-organized confederation of pirates, governed - if that term can be used indeed - by the Council of Captains, consisting of Captain Furrante (The Last Marceso), Captain Aeldys (The Sea Wolf), Captain Two-Eyed Pim, Captain Benweth, Captain Gold-Fin Chiara, Captain Falanroed (either the Dragon or Dragonslayer), and Captain Mer Trevisilo. Together, the seven exert a modicum of control over the pirate fleet. To claim a seat, the captain must have substantial backing and sufficient power politically and physically. Furrante is the first chair by virtue of his intriguing, which secured him the loyalty of the most ships in the Principi armada.

Although originally founded by refugees from Old Vailia, the Principi have been forced to recruit outside Vailian ranks to maintain their numbers. This has led to the emergence of two major factions among them, organized around two of the most powerful Principi captains. The old guard, led by Furrante, pines for a homeland and seeks to establish a self-sufficient pirate state in the Deadfire, using Ukaizo as a permanent base of operations to sustain themselves. The other, the new bloods, are led by Aeldys and embrace their seafaring ways, caring little for the grand stories of Old Vailia or the promise of a new homeland. The two factions remain at odds, with their leaders seeking every asset to undermine each other.

Religion among the Príncipi is as varied as membership. As sailors, many of them worship Ondra (as goddess of the oceans) and Hylea (for her influence over wind and weather) but others worship gods and goddesses that were more prominent in their homelands. Worship of Ondra, Woedica, and Hylea is especially common among descendants of Vailians.[3] Skaen is worshipped at Fort Deadlight.[4]

The Príncipi have fluid relationships with most other factions, as they are in a position to plunder (or sell to) just about anybody.

The Príncipi frequently target Vailian Trading Company ships. Remembering that the first families could not find shelter in the Republics during their voyage, the Príncipi subject even surrendering crews to (painless) humiliations, such as leaving them all stranded in their smallclothes.[3]

Additionally, the Príncipi have been raiding Huana villages almost as long as they've been in the Deadfire. Pirates may have a better relationship with larger towns, however, particularly when they're frequented by merchants who will buy stolen goods.[3]