From Pillars of Eternity Wiki
(Redirected from Player)
Jump to: navigation, search

The watcher is distinct from other playable party members in that they must always be a member of the party, and they are always the primary party speaker in conversations and all skill and attribute checks outside of scripted interactions. However, companions will interject when it makes sense for them to do so (as in the Infinity Engine games).[1][2]

The Watcher has several abilities that are not available to other party members. These are:

The Watcher also has access to some bonus talents not available to any other character or companion. These are often given out as quest rewards depending on the quest's outcome. For a list of these extra talents, see the Talent page.

This article or section is a stub. You can help the Pillars of Eternity Wiki by expanding it. 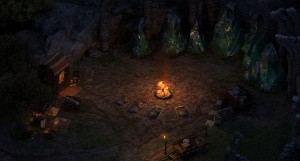 The early details of the Watcher's life, including their background, culture, and (in Pillars of Eternity) motivation are determined by the player during character creation, and as such, this wiki is not able to give a reasonable account of this part of their life. Similarly, the details of the Watcher's life during the time period of the games are determined by player choices, and no two players will have exactly the same experiences. There are, however, some details that will be constant across all playthroughs:

Five years ago, the player character travelled from their home to the Dyrwood, a nation that had waged war against the incarnated god of light, Eothas, resulting in his destruction. The country suffered from a plague of Hollowborn, infants born without souls, that many believed was punishment for killing a god. In an ancient, secluded ruin, the player character witnessed a secret ritual that inadvertently transformed them into a Watcher, one who can see and speak with souls. The ritual also gave the Watcher horrible visions, waking nightmares of a past life that threatened their sanity. To put them to rest, they pursued the man who had led the ritual, a seemingly immortal agent of the gods known as Thaos ix Arkannon. With divine assistance, the Watcher confronted and defeated Thaos, ending their visions and resolving the Hollowborn Crisis. In doing so, they also learned the great secret that Thaos had protected: that the ancient empire of Engwith had transformed themselves into gods. Their visions finally put to rest, the Watcher retired to the castle of Caed Nua, built atop a massive statue of pure adra, where they ruled in relative peace and prosperity.