Skills can be used outside of combat for a variety of purposes and they grant auxiliary combat bonuses. The five skills are Stealth, Athletics, Lore, Mechanics and Survival. Every class gains initial proficiency bonus in two skills, but not limited to them. Non-combat skills are gained separately from combat skills (Abilities, Talents) and they do not use the same resources.

Skills come to play in a variety of different contexts and partially determine how the player character or their followers can interact with the world around them.

Notably, only the Watcher's skills are taken into account in dialogue (i.e. a dialogue option that requires 8 Lore won't be available to a Watcher with 7 Lore, even if they have Durance with 12 Lore in the party). Other party members can use their skills in regular gameplay (the game will automatically select the character with the highest applicable score whenever eg. Mechanics are used) and scripted interactions where it's possible to select a character to carry it out (i.e. retrieving the dragon egg during Nest Egg, where you can pick a character with a high Athletics score).

At first level, a character only has their initial class and background bonuses to skills. Each class confers bonuses in two or three skills and each background in one or two skills.

Upon achieving a new level, a character gains six skill points. Advancing a skill to the next rank costs one point, plus one point per time the skill has already been advanced. Note that class, background, and other bonuses are "free" and do not increase the cost of advancing skills. 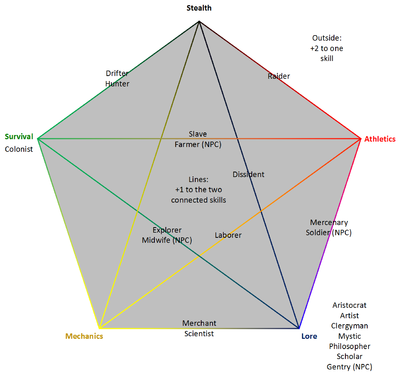 This section lists all bonuses from backgrounds:

Rites are a special, non-craftable type of scrolls that temporarily boost specific skills.