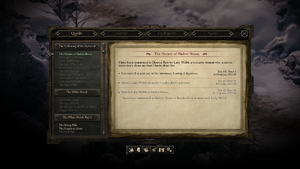 This page lists all quests in Pillars of Eternity and its expansions.

For a general discussion of experience earned, see Experience and Advancement.

These are miscellaneous quests which are not vital to the main storyline.

Every scripted companion has a personal side-quest that you can complete together with them:

Tasks tend to be less complex and significant than full-fledged side quests.

Bounties are a type of task that require a target to be killed in exchange for a reward - the bounty - usually in the form of a pouchful of copper pands. They are typically given in batches.

The first expansion for Pillars of Eternity. The action takes place in an abandoned dwarven stronghold, Durgan, where, as rumor has it, one can find tons of incredibly valuable artifacts.

The second expansion for Pillars of Eternity. The DLC continues the story started in The White March - Part I, expanding the game world with new locations and quests.