This is an archive for resolved issues from the admin noticeboard, older than a year and ordered by date and time of each section's last comment. Please post new topics on the noticeboard itself.

Page for endings created. Could it be added to the main page?[edit source]

So I've created a page for the endings: http://pillarsofeternity.gamepedia.com/Pillars_of_Eternity_Endings

Based it on the similar page on the Fallout wiki: http://fallout.wikia.com/wiki/Fallout_2_endings

Could it be added to the main page, say, in the Quests section?

IE isn't fully supported in VisualEditor currently. They're planning on supporting version 9 and up, but it's not fully there yet. Here's the info: https://www.mediawiki.org/wiki/VisualEditor/Target_browser_matrix --Alianin T • C 22:01, 23 November 2015 (UTC)

Today some ads have started appearing for movies with audio, sometimes 2 per page, that loop continuously. These are very intrusive - distracting to the point where pages become almost unusable. They re-start frequently even if you pause and/or mute them. Can we please dial them back to something reasonable. --Tungsticgp (talk) 04:11, 19 December 2015 (UTC)

Those kinds of ads definitely should not be happening. To assist in tracking down and getting rid of those kinds of ads, it'd be helpful if we can get this information:
Thank you! --Alianin T • C 14:52, 20 December 2015 (UTC)

One example from just now is an ad for godaddy.com, at the top right of the Character creation page, just under the page heading line. After a while it was replaced with a Star Wars ad that was OK (did not auto-play).
Here's a screen shot of that: ==> 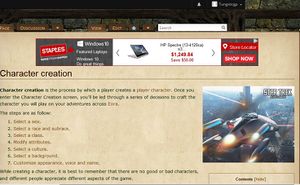 PoE Video Ad
The ones I saw yesterday that auto-played continuously started appearing an hour or two before my initial post above. They appeared at the top and/or bottom right, on several of the pages I was editing, such as Forum. (See my contributions for Dec 19 around 22:00 local time - EST.) They were also for godaddy.com and Star Wars, if I remember correctly. Sorry - no screen shots.
--Tungsticgp (talk) 02:43, 21 December 2015 (UTC)

both pages are about the same item (given internal name is correct, by the way!): http://pillarsofeternity.gamepedia.com/Girdle_of_Maegfolc_Might http://pillarsofeternity.gamepedia.com/Belt_of_Maegfolc_Might I don't want to start deleting one, because there are certainly other pages linking to it, so I'd certainly mess it up somehow. –Preceding unsigned comment was added by 79.194.228.208 (talk • contribs) at 01:54, 13 May 2016 (UTC). Please sign your posts with ~~~~

I have photoshopped the three expansion places (Crägholdt, Yenwood Field and the White March) into the travel map. Maybe an admin would be so nice to update http://pillarsofeternity.gamepedia.com/File:Travel-map.jpg with this http://fs5.directupload.net/images/160514/j6p6ehgl.jpg On a side note, the new file is a good deal smaller because the old one wasn't properly compressed, 2,4 MB are just too much for a jpg of that format. --79.193.81.183 21:53, 14 May 2016 (UTC)

Hi there, I am planning to do some work on SMW and add new semantic properties to items and enchantments. But to do this I need to use property value arrays and parse them.

Would it be possible to add and install Extension:Arrays?
I think that if we want to start making this wiki more semantic, we will need that extension sooner or later anyway. In particular, it is needed to solve this question I asked on StackOverflow. Which, basically, is really a generic need, if we want to depend heavily on SemanticWiki at some later time.

Currently Array is not an approved extension for use on Gamepedia. In discussing with our developers, it could take a while to get added and may include some additional dev time since the extension is outdated. We are currently looking at Cargo as a replacement for SMW. You're welcome to check that extension out and see if it might suit your needs instead. --Alianin T •  C 22:07, 1 November 2016 (UTC)

Hi Alianin, after some reading & local testing, I can confirm that Cargo seems to be (almost) full replacement for Array extension. It is little more complicated, but I have found workarounds for everything I wanted to use originally. Drop me a message when the extension will be installed & available for use ;-) —FurloSK (talk) 06:17, 6 November 2016 (UTC)

Plea to become an admin[edit source]

few days ago Ineth2 has left a message on my user page with a proposal for me to become a wiki admin. I would be very glad to become one, but I see no button to "Claim this wiki", as Ineth has mentioned in her comment. Gamepedia help page recommends as a second way to become admin notifying admins through this noticeboard. So—here I am, asking for your help :)

I've done some changes to this template – for a better look, I hope. What still bothers me is that much space between the quote itself and its author. Example:

But as far as I understand, a change would have to be done in the MediaWiki – where I haven't access to. So could please an admin take care of this? Thanks. CompleCCity (talk) 11:36, 25 December 2016 (UTC)

I suggest adding http://www.falloutwiki.com/$1 to the Interwiki list. The Vault has http://eternity.gamepedia.com/$1 on its own since October 2013 and lists this wiki as an affiliate in the main left navbar – I think, because VaultAusir is the founder of both wikis, and there's many parallels between both games' developers.

When choosing (at least) the game as license during the upload process, the following error is generated and the file not uploaded:

While searching for the reason of the error, two additional things came into my mind:

The file error is something we've been trying to chase down, but it's been hard to duplicate since it's so random. For now, just try re-uploading and the file should go through, if it hadn't already.

Okay, I try again next time. Until now I simply added lic and cat already to the file description before uploading.
And thanks for pointing me to the visual – and also clearly visible - difference between the Vault and here. That's something that could have come to my mind by itself… :rolleyes: --CompleCCity (talk) 20:45, 25 December 2016 (UTC)

As of recent wiki update, some pages are throwing "Error: String exceeds 1,000 character limit." or, worse, not executing properly without showing error.

I suggest increasing limits of these three variables:

I know the limits are set for security reasons, but I am working for a long time on semantizing the wiki and 1000 string limit is too low for some specific scenarios.

According to discussion here, it is possible that increasing limit of $wgPFStringLengthLimit alone will suffice—please, test the mentioned Gyrd_Háewanes_Sténes#Upgrades page to see if the error disappeared.

Now that the sequel has been officially announced, we should support information and news about it appropriately. Hey – we're the Official Wiki! ;o)

I haven't done such a thing before, always came into wikis much time after a game's release. So I have no experience on such a topic or how to do it and what more could/should be done. I suppose this would be a task for Alianin. ;o) --

Presumably there will also be some challenges in how to structure the wiki once Deadfire is out, and eventual more sequels. For instance, take class pages, like Ciphers. Bound to be changes to Powers and whatnot, so how should the pages be structured in the future? Divided by each game, or separate pages for POE1-ciphers and POE2-ciphers? Presumably the latter is a nightmare, and the former will lead to longer pages, but I suppose the former is better. I see that is how they have done it on the Witcher wiki (although I don't like how almost everything leads to category pages there, instead of a 'proper' Items page and so forth). Pangaearocks (talk) 02:44, 17 August 2017 (UTC)

Cargo has been installed[edit source]

User:Game widow was kind enough to install Cargo on the Wiki, which I'm very pleased about. It should be no problem to run both SMW and Cargo concurrently. The syntax of Cargo is less complex than SMW's, it generates tables automatically, and it's pretty straightforward to query the Cargo tables and generate output in whatever format you like.

There is an example page here, which queries a few examples and puts them into an example table. It uses this template (I had to put it in the main namespace, otherwise Cargo didn't recognise the template as a template; see here.

There are a few differences from SWM that we need to consider when designing/updating templates and managing the data. Please check this migration guide for more information.

I'm quite excited about this because it should make handling all the templates and data on this fairly big wiki easier. I'd love to hear what you guys think about this though, and whether we should, in time, aim to migrate the whole wiki to Cargo. I know especially User:FurloSK has put a lot of work into items and their templates. I'm new to this place, but it looks like he has been very active, and I noticed there was brief talk about Cargo earlier, so I'm looking forward to feedback :)

Preparing the Wiki for Pillars of Eternity II: Deadfire[edit source]

With Deadfire (hopefully!) coming out in about 6 months, I think we need to think about how to structure the wiki for when there will effectively be boatloads (heh) of double info about weapons, armour, classes, items, creatures, even NPCs. I've looked into templates, but the coding there gives me a headache. I know a bit of coding, but the syntax is completely different to what I'm used to. Have also looked into templates because I find it odd the wiki doesn't have bestiary pages. Leaning on the Witcher wiki, because these are the two game series I've played recently, they essentially have an infobox for each game. So there is infoboxbestiary, infoboxbestiary2, infoboxbestiary3, and same for locations, weapons etc etc. I think we need something similar.

Starting looking into it with a mind to lay out needed properties, but tbh it looks like a Gordian knot with all that coding, and I don't know how different templates interact either. Below are two examples (don't know how to quote code without running it).

I have created a category for restructuring the wiki: Category:Wiki_restructure. Didn't hear anything for over a week, so I've started the process now; in short making categories with Pillars of Eternity and Pillars of Eternity II prefix. Naturally this means current pages and categories must be edited too, so they point to the correct categories, but once this whole thing is done, the structure should be better for moving forward as a multi-game wiki. Some of the changes can be observed from the category root: Category:Contents Pangaearocks (talk) 20:26, 22 August 2017 (UTC)

I have moved the Categories restructure discussion to a more appropriate place – and will take part in it. --