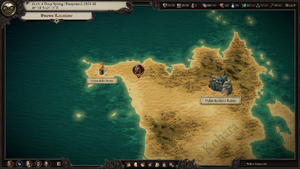 The world map interface; the party is currently traveling overland on Poko Kohara.

Pillars of Eternity II: Deadfire world map covers the Deadfire Archipelago and the islands that cover it. It's distinct from the previous game in that you use a ship, The Defiant, to travel across the map, explore, and run into various random encounters.

To avoid bandwidth overconsumption, the interactive map is found here.

The key difference between the first game and the second is the fact that travel is much more involved and requires resources. As your ship crosses the archipelago, you need to watch your reserves of cash, food, and water to avoid mutiny, starvation, dehydration, and as a consequence, losing your crew, health, and/or life. Finding the optimal route across the waters of the Archipelago while exploring is a core part of gameplay.

Thankfully, once you make landfall - at a port or a bay - your crew is smart enough to forage for food on their own. As long as you stay on land, you only have to pay your crew's wages, without worrying about food.

There are many types of areas that can be found beside marked locations, each of which can be looted or explored. 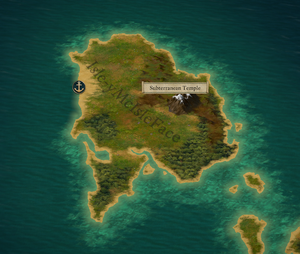 An example of a renamed island

Upon clearing the following locations, you can choose to name the island they belong to. This places a large label on the island with the name you inputted.

The following locations are present in game files, but either do not have an associated location, have been renamed, or have been cut from the game.

The party receives a small amount of experience upon exploring new locations, points of interest, and areas of the world map for the first time.

For player-navigable areas, this experience is calculated with 5 * ExpectedPlayerLevel which determines the amount given to each party member. Experience is given when first entering the area, as well as when fog-revealing certain points of interest in the area (although this is rarely done).

On the world map, discovering larger and more notable areas (such as Karatapu Channel and Kua o Rikuhu Islands) will also grant the party a substantial amount of experience. When this occurs, the name of the location and the experience granted is shown in a large font at the bottom of the screen.

All exploration experience is given a party size bonus and player–companion adjusted experience.