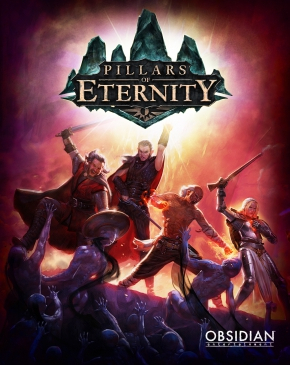 What is Pillars of Eternity?[edit | edit source]

Pillars of Eternity (original working title Project Eternity) is an isometric, party-based RPG featuring a real-time-with-pause combat system and a magic system revolving around souls. The game is set in an original high fantasy setting created by Obsidian Entertainment, promising a mature-themed story with deep dialogues, reactive characters, and meaningful choices and consequences.

When will Pillars of Eternity be available?[edit | edit source]

Pillars of Eternity is tentatively scheduled to be released on March 26 2015[1].

How will I get my digital copy of the game?[edit | edit source]

In the coming months, every backer will receive a survey asking them what platform and distribution network they would like. The game will be available at both GOG.com and Steam, so if you prefer DRM-free, you can choose the GOG option, and if you like Steam's integration, including achievements, and possibly cloud saves, you'll be able to choose that as well.

If you bought additional copies as add-ons, you'll be able to tell Obsidian which one you want per key.

Obsidian does not yet have a DRM-free distribution partner for Linux, but one will be available by launch.

What languages will Pillars of Eternity be in?[edit | edit source]

The initial release will be in English, French, German, Italian, Spanish, Russian, and Polish. Obsidian are looking into ways of translating the game for fans all over the rest of the world.

What about other platforms?[edit | edit source]

Using the game engine Unity, Pillars of Eternity supports Windows PC, Macintosh OS X, and Linux. The game has recently been ported to consoles including the latest release on 8th August 2019 on Nintendo Switch. Tablets and smartphones are not currently supported.

What file formats will the Digital Download of the Soundtrack be available in?[edit | edit source]

Both MP3 and FLAC formats will be available for the soundtrack when it becomes available to download.

What are the system requirements for Pillars of Eternity?[edit | edit source]

The system requirements for the three operating systems that Pillars of Eternity is supported on, are as follows:[2][3]

What are the available races?[edit | edit source]

The Players can select from six main races: aumaua, dwarves, elves, godlike, humans and orlans. All of the races have different subraces from which the player can choose.

How about classes?[edit | edit source]

What is the combat like?[edit | edit source]

Pillars of Eternity's combat will feel very similar to the combat in the Infinity Engine games, which used a "real-time with pause" system. In such a system, events between combatants occur simultaneously, but the player can pause the game at any time. The player selects and commands one or more of his or her party members to issue orders, ranging from continuous activities, like making standard attacks, to the activation of limited-use tactical abilities, such as spells.

Like the Infinity Engine games, Pillars of Eternity will support auto-pause features that allow players to establish conditions under which the game will automatically pause (e.g., if a party member becomes unconscious). It will also feature a slow combat toggle that can be used with or in lieu of the pause feature. In slow combat, players can manage the flow of combat without needing to halt the game entirely.[5]

You will get XP if you complete a quest objective, and for progressively filling up Bestiary entries in you party's Journal. Bestiary XP is rewarded when new entries are unlocked in the Bestiary page in the Journal, and will stop being rewarded if the entry is complete. Additionally, exploration XP is given out when new areas and landmarks are discovered in the world.[6]

What is the highest level?[edit | edit source]

The highest level of any character is 16, but on a normal non-completionist playthrough, the characters will not reach 12th level.[7]

Are there quest markers?[edit | edit source]

Can I save everywhere?[edit | edit source]

The current plan is, that you can save anywhere (except during combat).[9]

What will changing the difficulty level change?[edit | edit source]

Changing the level of difficulty generally means changing what creatures (and how many) are present in encounters. Outside of Path of the Damned, there aren't any plans to scale health, level, accuracy, defenses, etc.[10] and the Artificial Intelligence will also not change.[11] E.g. if there's a fight that involves wurms on the sidelines, the fight could go from having 3 wurms to 5 wurms to replacing all of those wurms with a single drake. On average, you will probably get a small increase in loot on higher difficulty levels, but it's possible to get less in certain circumstances.[12]

What about the setting?[edit | edit source]

Pillars of Eternity is set in a world created by Obsidian Entertainment, where mortal souls are bound to an eternal cycle of life and reincarnation believed to be watched over by the gods. Though cultures and individuals have different beliefs about the nature and purpose of this often-mystifying cycle, it is only recently that mortals have made significant advancements in understanding its fundamental mechanics through the science of animancy.[5]

Where does Pillars of Eternity take place?[edit | edit source]

The story takes place in a small nation in the world's southern hemisphere called the Dyrwood. The Dyrwood is a heavily forested, coastal region where colonial powers from across the ocean have settled and formed an uneasy relationship with the local residents, tribes of orlans and elves who are protective of the ancient ruins of Eir Glanfath on the forest's interior. Eir Glanfath was an ancient melting pot of races that built elaborate, often massive, structures out of a living shell-like substance called adra. Though the fate of the ancient Glanfathans is unknown, their dangerous and complex ruins show evidence they possessed extensive knowledge of how souls work. For this reason, all of the surrounding colonial powers aggressively fight for the chance to explore and plunder Glanfathan structures, often bringing the local tribes into conflict with their relatively new neighbors—and the neighbors into conflict with each other.[5]

Who is the player character?[edit | edit source]

The central character in the story is a newcomer to the Dyrwood, a man or woman who is caught up in a bizarre supernatural phenomenon. This event puts them in a difficult position, where they must explore the new world to solve a series of problems that have been thrust upon them.[5]

Are the 'Pillars of Eternity' an actual set of pillars within the game?[edit | edit source]

Well, to be completely honest, I will answer that, not until I see the questions... so it will have to wait.[5]

What will the art style be like?[edit | edit source]

The art style is fairly realistic and uses a somewhat subdued, natural color palette, especially in outdoor environments. Character proportions are also fairly realistic. Equipment designs and proportions are based on their earthly historical counterparts, with an overall emphasis on function in their form. However, because this is a fantasy game, many environments will also be fantastic, with unearthly architecture, unusual materials, brilliant colors, and beautiful embellishments when appropriate.[5]

What resolutions are supported?[edit | edit source]

Pillars of Eternity will support resolutions from 1280x720 and up. The environments are rendered out at a high resolution and support a wide range of scalability.[5]

What size are the portraits of the characters?[edit | edit source]

Pillars of Eternity currently uses two sizes of portraits, one for the character/inventory/dialogue screen and one for the main HUD. The "big" portrait size is 210x330 and shows "head and shoulders" with a bit extra, the closest comparison would be Baldurs Gate 1 portraits. The smaller portraits have a size of 73x86 and shows only the face.[8]

How can I contribute?[edit | edit source]

The kickstarter campaign has ended, but you can still use PayPal to donate and receive a copy of the game. Please visit the Pillars of Eternity web page for more details.

Where to Buy[edit | edit source]