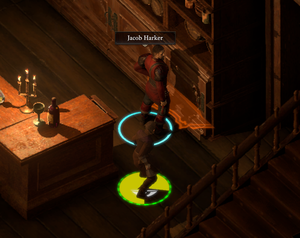 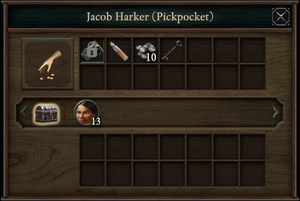 A pickpocketing loot window. Note the locked item on the left is too difficult to steal, and requires a higher Sleight of Hand level. Other items can be stolen without repercussions.

Pickpocketing is a mechanic in Pillars of Eternity II: Deadfire that allows a character to steal items directly from other characters without them noticing. It depends heavily on Stealth, which determines if you can approach a target unnoticed, and Sleight of Hand, which determines what items can be stolen and from whom. Pickpocketing doesn't net you much loot, but is relatively effortless and can be useful in a number of situations. For example; stealing a key from an NPC to open a locked door instead of convincing or killing them.

Starting a pickpocket is as simple as left clicking on a character while in Stealth. However, you may only pickpocket while you are hidden from both your target and other potential witnesses, otherwise you will see the message "You cannot pickpocket while being observed." Note that a character is considered "hidden" when the circle below them is not fully red. Once hidden, you may click on a character to view a standard pickpocketing loot window.

The window shows a number of items on the character that can be stolen, regardless of if you actually meet the requirements needed to steal them or not. This "inventory" is separate to the character's actual inventory, and is generated semi-randomly based on loot lists. Most NPC's will only have one or two items on them, commonly a consumable item or a stack of currency, but very rarely another type of item. Generally vendors and named characters will have more and/or better loot, which may include quest items and associated keys. Some items cannot be pickpocketed, and therefore will never show up in the pickpocket UI.

A character's Sleight of Hand skill determines which items you can pickpocket and from whom. Each item in the target's inventory has a calculated "difficulty level" that the skill is checked against. If the difficulty level of an item is higher than your current party assisted Sleight of Hand level, the item will be locked and cannot be stolen.

An item's difficulty level is limited to a minimum of 1 (anything less than or equal to zero is set to 1), therefore at least 1 point in Sleight of Hand is required in order to pickpocket anything.

Two primary factors influence the difficulty level of an item:

In addition, two Stealth-based modifiers are present in portions of the pickpocket check. However, in the current game these seem to be ignored and go unused.

In addition to taking items from NPCs, you can also move items from the your personal inventory onto the target character. Doing so does not require any special checks, as long as you're able to sneak up to the character and start pickpocketing. While this doesn't have an effect for most items, placing an explosive into a character's inventory will cause it to explode after a 10 second timer. The placed bomb gets a number of bonuses when it detonates.