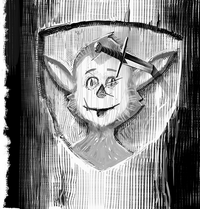 A typical target in Orlan's Head

Orlan's Head is a game of chance and skill, commonly played in the inns and taverns of The Dyrwood, and usually accompanying a wager. It involves throwing daggers at a target resembling the head of an Orlan. Each opponent gets three throws, and depending on where the dagger lands on the target determines the points received. The points are tallied for each round, and whoever has the most points at the end wins. The player can take one of two approaches; aim for the ears or for the nose.

It is one of two dialogue-based minigames in Pillars of Eternity, the other being Dozens.

A score is generated using the following formula:

The D100 roll (1-100 inclusive) is influenced by your Perception and Dexterity rating. The result (and therefore the points gained) is determined by checking to see if the score is within the following ranges (lower limit inclusive, upper limit exclusive). Your approach - i.e. whether you aim for the ears or nose - will skew the ranges differently. Aiming for the nose will increase the probability of hitting the nose, but also increase the probability of hitting lower-scoring parts of the target. A score greater than or equal to 100 will always hit the part you were aiming for.

Pillars of Eternity II: Deadfire adds the "cheating" approach, which provides yet another skew to the ranges. Cheating requires Sleight of Hand 8, and Streetwise 12. Making a cheating throw will ensure that you will never miss, and will greatly increase the chance of hitting the nose (rolls of 80 and above will always hit the Nose when cheating). Otherwise, cheating has the same chance of hitting the other parts of the target as the "nose" approach (assuming the average PER and DEX rating).

* Given a DEX and PER score of 10 (Average)
** Note that the ranges are lower limit inclusive, and upper limit exclusive.

Taking into account your Dexterity and Perception rating will shift the score/dice roll positively or negatively. The average of these two ratings should be at least 10 in order to give yourself a level playing field, with a possible score range of 0 to 100. For every change of 1 in the average rating away from 10, the range of the possible scores that can be generated by the roll is shifted by ±4. At an average of 0, the possible range of scores is -40 to 60, while at an average of 25 the range is 60 - 160.

You can play Orlan's Head at The Gréf's Rest, in Stalwart Village [WM1]. Andred and Byrhtwen are playing the game in the corner of the tavern. You can bet them

50 to play. If you win more than three rounds in a row, you get the talent Flick of the Wrist, granting +4 Accuracy with daggers and stilettos.

While at sea, you occasionally find your crew playing Orlan's Head.

You are able to intervene, ordering them to stop and make themselves useful, walk away, or agree and play a round for a wager. With Serafen in your party, he'll express his disdain for the game. If the Watcher is an Orlan, the opening text is slightly different, with one of the daggers barely missing your head as a crew member accidentally mistakes you for the target.

The rules are the exact same as in Pillars of Eternity, the only difference being the ability to cheat (see above). The cost to play is determined by your current level:

Winning the game nets you twice your wager. Either winning or losing grants yourself and your opponent 1 Sailor Experience, and the ship gains +5 to crew morale.