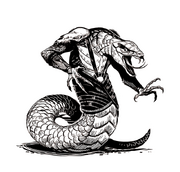 Bestiary image of a Nāga

Nāga are a species of large, intelligent reptile. Though they bear some humanoid characteristics, that is where the comparison ends. Their society is complex enough to make interactions with other kith a possibility, but the Nāga have never entertained cooperation as a viable alternative to violence. Nāga adhere to a strict religious doctrine that mirrors the Wheel in many aspects, though focuses prominently on the Nāga's superiority above all other creatures. Most importantly, the reptiles have a long memory upheld by their shamans, which stretches back thousands of years. The Nāga witnessed the fall of Ukaizo and the terrifying destruction brought down upon Eora by the nascent gods, and fear of a repeat of the apocalypse underpins much of their thinking and operations.

Within Nāga society, they divide up individual roles around a mixture of born traits, cunning, and ambition. Nāga possessing few talents above the ability to grip a sword are consigned to the warrior class. The most venomous and keen-eyed Nāga are trained as skirmishers or elite commanders. The spiritual and intellectual Nāga are either instructed into the role of shaman - or fight their way into it - likely spending much of their career defending this status against competitors.