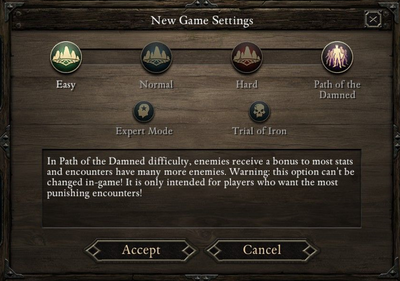 The game's difficulty can be set to five difficulty settings: Story Time, Easy, Normal, Hard, and Path of the Damned. Harder difficulties give you more challenging encounters (adding tactical difficulty by replacing weaker enemies with more powerful types or increasing how many are present in encounters. AI won't change based on level of difficulty)[1] and reduce how many camping supplies players will be able to carry at a given time (unlimited on ST, 6 on easy, 4 on normal, and 2 on hard and PotD), limiting the amount of outdoor resting they can do. On average, players will probably get a small increase in loot, but it's possible to get less in certain circumstances.[2]

It is a spiritual successor to Icewind Dale's Heart of Fury mode. All enemies from all levels of difficulty are enabled and the combat mechanics are amplified to make battles much more brutal for everyone involved. It is the only difficulty level which changes enemy stats, giving enemies +15 Accuracy and +15 to all Defenses. Enemies may use abilities on Path of the Damned which they don't use on lower difficulty levels.

It's possible to switch between Easy, Normal and Hard during a game in progress, so you can always bump it up or down a notch. 'Path of the Damned' is the only difficulty you have to commit to right from the start.

Story Time mode is currently only available in the 3.0 beta version.

Pillars of Eternity features two game modes, Expert Mode and Trial of Iron, that players seeking extra challenge can opt-into at the beginning of each game. Both modes are optional and can be combined together in any combination on top of the standard difficulty settings. Neither mode can be changed in-game.

The mode is similar to Temple of Elemental Evil's Ironman Mode. It is likely a wink to classic CRPGs of the 80s, intended to restricting any reloads to counteract regrettable decisions, thus increase game difficulty, making it harder for players to abuse save/load to get the results they like also known as Save Scumming.

In the Game settings, there are options that can be enabled or disabled to tweak the game difficulty and overall feel on top of the difficulty settings selected. Players can enable or disable any of these options, during game creation or later on at any point in the game. All of these options combined are the make up of Expert Mode.

Combat is performed in real-time, but players can Pause or use the Auto-Pause criteria to plan or assign actions to their party members. The Slower Combat toggle is another option for players who would like more time to think without constant pausing and unpausing.[5]