This article is about Eora's metaphysical concepts. For the passive skill, see Metaphysics.

Metaphysics encompasses all known soul related concepts. Although most concepts are beyond the physical reach of kith, they have accepted them.[1] 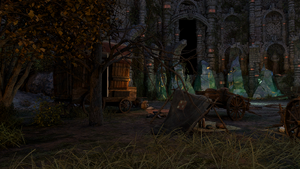 Adra pillars at the encampment just outside Cilant Lîs.
See: Soul, The Wheel

A Soul is an energy that can bind to an individual. When that individual dies, the energy moves forward in the eternal cycle of reincarnation, known as The Wheel.[1] Souls are comprised of soul essence[2], a power that can exist in places other than souls and is used in magic.

The Wheel is a natural phenomenon. After death, souls travel to a shadow world called the In-Between. Using pillars of adra, souls then enter a place known as The Beyond, the realm of the gods, before they are reincarnated back into the world.[3]

Animancy is the science of soul manipulation. A field both controversial and relatively new (within the past few hundred years). Banned in some nations like Aedyr, but permitted in other countries like the Dyrwood and the Vailian Republics.[4]

Animacy has had varying degrees of success. In 2809 AI, animancers tried to solve a hollowborn crisis (children born without souls) known as Waidwen's Legacy by implanting the souls of animals into children. Unfortunately, those children became feral when hitting puberty, turning into Wichts. 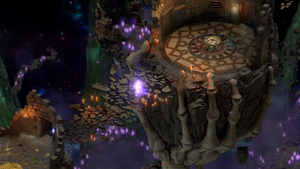 A portion of The Beyond.

There are three known realms.

The gods are a group of 11 known entities. They have a direct hand in guiding kith and maintaining the Wheel. They are sustained by soul essence.[6]