Mechanics allow a character to:

In Pillars of Eternity II: Deadfire, the trap difficulty is determined by the trap's level (as per the table below). Trap difficulty (as shown in the chat log) is not to be confused with trap level, which is hidden from the player. 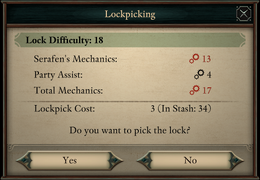 A standard lockpicking prompt in Deadfire

Successfully picking a lock or disarming a trap gives the party 5x the lock/trap's difficulty in experience.

The following bonuses are applied as a result of a character's class and background.

In Pillars of Eternity II: Deadfire

In addition to a character's base Mechanics, there are various ways to gain further bonuses. Some of these buffs are permanent or can be activated for as long as desired, while others must be enabled and then expire after their duration runs out. Some can only applied to the character themselves, while others apply to allies. Some buffs stack, others are mutually exclusive.

A character's Mechanics score for a certain attack can benefit from the given number of bonuses from each of the following tables at the same time.

One only – While equipped

One only – Duration: see table

One only – Duration: see table

One only – For the protagonist only – Duration: see table

unlimited – for the user for a duration (sometimes only in combat)

In quest related dialogs the player's Mechanics score may give options that are related to opening certain locks.

In scripted interactions the Mechanics score is checked for actions that are related to opening certain locks. Some situations allow to choose which party member will perform the action, sometimes a certain member or the player will be checked.