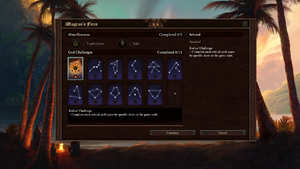 Magran's Fires are optional challenges you can select when starting a new game in Pillars of Eternity II: Deadfire (by clicking the head at the bottom of the main menu). These generally make the game more difficult and are aimed at veteran players or those looking to replicate the achievement-related challenges found in Pillars of Eternity and The White March - Part I + The White March - Part II.

"The Ultimate" challenge was added in patch 6.1 (5.0.0.0040). It enables all other God Challenges, Trial of Iron, Path of the Damned, and Solo mode all at once, making the game extremely difficult. As with the other challenges, it also disables console commands/cheats, and mods. Completing the challenge is dictated by a quest that gets added upon starting the game, which involves killing a number of Mega Bosses and powerful enemies encountered throughout the course of the game and its expansions.

Being one of the first 12 players to complete the challenge it would earn the player a spot on The Ultimate "Roll of Honor", a physical plaque in Obsidian's studio lobby that would immortalize their achievement. In addition, the first 50 players would be sent a special Josh Sawyer patch to celebrate.

During Eothas' challenge, the player must complete the following quests before specific dates. These are always a set amount of days from the start of the game, noting that Pillars of Eternity II: Deadfire begins on the 18th of Mid Spring (Majprima), 2828 AI, at hour 6/7. To assist, a timer is shown in the top right of the screen, and the date of completion is shown in the journal. The hour of completion is always hour 6.