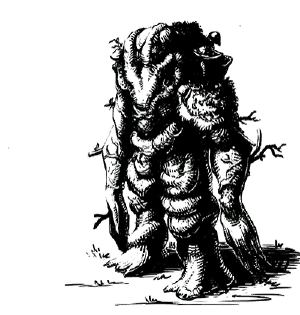 Bestiary image of a Swamp Lurker

Lurker are a race of creatures in Pillars of Eternity.

Lurkers (swamp and forest) are actually a colony of several different species of parasitic, carnivorous plants and fungi working together to hunt common prey. As a whole, they stand nearly ten feet tall in a “body” comprised of vines, leaves, roots and earth in a vaguely anthropomorphic shape. The coexistence of so many separate organisms can make them hard to kill, and it is usually best to sever the parts that enable locomotion or to light the entire colony on fire.

While the creation of lurkers is a bit of a mystery, some speculate that they form when certain species of flesh-eating plants join together on a common host, such as a soulless victim of dank spores, and become strong enough achieve animation. This theory is supported by the fact that most lurkers, when cut open, contain bones and other remains riddled with roots and spores.

Lurkers are notorious for hiding in plain sight, often remaining motionless and waiting amongst the trees and underbrush to ambush their prey. They are sophisticated enough to store food. It’s not uncommon to see several unconscious victims tangled in a lurker’s vines, being saved for a later feeding.