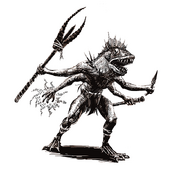 Lagufaeths are a sapient reptile race found across Eora.

Lagufaeth are territorial, four-armed amphibians. Though their thick skin protects them from the cold climate of the White March, they tend to favor hot springs. Lagufaeth are communal wilder with rudimentary weapons but a natural aptitude for magic. They are especially dangerous in the mountains, where storms and snowfall may hide their presence from travelers until it's too late. They can remain under ice for extended periods of time and have been known to surprise unwary fishermen.[1]

A lagufaeth redfin is a dominant, mature lagufaeth. They may be male or female. A lagufaeth that transitions into a redfin develops a reddish-brown tint to its skin and a bony crest atop its head. They are rarely the oldest member of a group, but they are the most aggressive, and they are typically responsible for defending a nest or group. When a lagufaeth redfin loses status, its crest falls off and its skin returns to a shade of blue, green, or purple.[1]