From Pillars of Eternity Wiki
(Redirected from Invocation)
Jump to: navigation, search

They are storytellers and repositories of ancient lore from myriad cultural traditions. While they have some minor talent in traditional arts of combat and soul-based magic, their true power lies in their chants and invocations.[1] They construct chants from individual iconic phrases, through the clever overlapping of phrases, chanters can grant their allies a sizable stack of minor bonuses over large area.[2] While chants may seem modest compared to a wizard or a priest magic, chanters are able to recite their chants while occupied with other activities, making them extremely versatile.[1] Additionally chanters invocations are pretty powerful spells and they have the highest number of summoning spells.[3]

Chanters can be found in almost any culture, but are most often seen in communities with a strong oral tradition. They are repositories of folk knowledge and common wisdom, tellers of tall tales and hallowed legends. They use these stories and legends to stir the memories of the dreaming lost souls and soul fragments that surround them. The spirits respond by creating magical effects, essentially playing their part in the recreation of the legends. In this way, chanters act as directors of supernatural actors playing out momentary plays for the chanter's benefit. Due to their heavy focus on folktales and storytelling, they have an inherent bonus to Lore. As explorers of many lost and forgotten vaults dating back to Eora's antiquity, chanters also have a bonus to Mechanics, helping them bypass tricky locks and traps.[1][2] 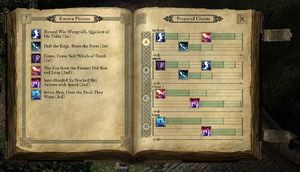 Chanters use the power of their souls to work their magic.[2]

To use their special kind of magic, chanters link together individual short phrases from different legends to create longer chants. The phrases have distinctive, thematically-appropriate effects that are of low power but can be applied while the chanter is engaged in other combat activities. As one phrase ends and another begins, the effects of the first phrase will linger, allowing multiple phrases to overlap with each other. Through the clever overlapping of phrases, chanters can grant their allies a sizable stack of minor bonuses.[2], or by using a single phrase can achieve 100% uptime on a specific bonus.

Chanters learn some phrases as they advance, and can find new phrases in the world. [2][4]

While "phrase" primarily refers to the passive abilities that make up a chant, they are also accrued as a resource, and are used to cast chanter invocations - the equivalent of traditional spells and abilities.

Chanters have a chant interface that allows you to place in all of your phrases to see how they will overlap/twist. When you pick a chant (which is a set of phrases you put together), you just click on it and it will automatically take effect when combat starts.[8]

With each chanted phrase that passes, chanters gain greater control over the spirits assisting them. When enough control is gained, chanters can direct them to perform a single powerful spell called an invocation. Invocations are often support-oriented, but some contain powerful offensive effects. Invocations are so powerful that they disrupt a chanter's chants, disabling their effects for several seconds until the chanter can recover.[2]

Invocations are powerful, but the intervals between using them are long and they can never be used at the start of a fight, because the chanter need to speak a number of phrase before he can use Invocations.[5][9] Chanters have the highest number of summoning spells of all classes.[3]

Phrases are used as a resource to cast Invocations, which are more akin to traditional spells and abilities cast by other classes. Invocations are however not limited to a maximum amount of uses, and can be cast as long as the chanter has the required Phrases.

Earlier in development, invocations were called roar but the name was changed to Invocation, because it allowed Obsidian to do more with their effects. Roars were conceived of as almost entirely offensive blasts.[5]

Note: Pillars of Eternity only

Chanters in Pillars of Eternity II: Deadfire are able to choose between five subclasses (or no subclass): Beckoner, Skald, Stormspeaker, Troubadour, and Bellower.

Note: Tekēhu only - as Chanter

Chanters possibly provide the best damage support for your five character party by simply enabling others to do more of it. With their low health, they most definitely do not contribute as the tanky type. Instead, they boast of the best ability to summon reinforcements into battle, unless you opt for a subclass later in the game that prevents summoning, like from a certain dwarf available later. If you want your Chanter near the front line, then it's best to choose a weapon with Increased Reach, like a pike or quarterstaff. A single class chanter should avoid both guns and arbalests, although any other ranged weapon performs well if you prefer.

If you consider multi-classing, it's very important to consider what spells to choose if you go with a caster specialist. Since Phrases don't stack well with the long casting times of offensive spells, quickly fired defensive spells may provide the better route. Paladin provides a nice blend between both supportive offense and defense in this regard, and it allows more flexibility in where you play your character. Wizard can also do well if you only go for weapon and defensive spells for a just behind the front line type, because while weapon spells appear nice, they summon either a pike or quarterstaff for those close ranged battles that work better behind a tanky type. Summoning reinforcements are nice, but they will not replace a tanky character, who absorbs blows and distracts enemies that your chanter will struggle against.