From Pillars of Eternity Wiki
(Redirected from Grazes)
Jump to: navigation, search

All attacks in Pillars of Eternity - no matter whether they're made with weapons, spells, or other abilities - go through the same attack resolution system. Each attack can result in a Critical Hit, Hit, Graze or Miss. The likelihood of each outcome is based on the difference between the attacker's accuracy vs the target's defense values and can be affected by various abilities.

An attack roll represents your attempt to strike your opponent resolved by a single d100 roll (a number between 1 and 100). The attacker chance to roll Critical Hit, Hit, Graze or Miss is determined by the difference between his Accuracy value and the relevant defender's defense.

The Defense used against attack accuracy is determined by the type of attack:

According to attack roll value one of four attack outcomes willl take effect:

The Default ranges for an attack roll are:

Therefore, if the Accuracy and defense values are balanced, the majority of attacks wind up being Hits or Grazes. On the other hand, when the difference is extremely high, possibility of a Miss or a Critical Hit can sometimes be negated entirely (while always allowing the possibility of a Graze or a Hit at the extreme ends of the spectrum.Verify[1][2]). 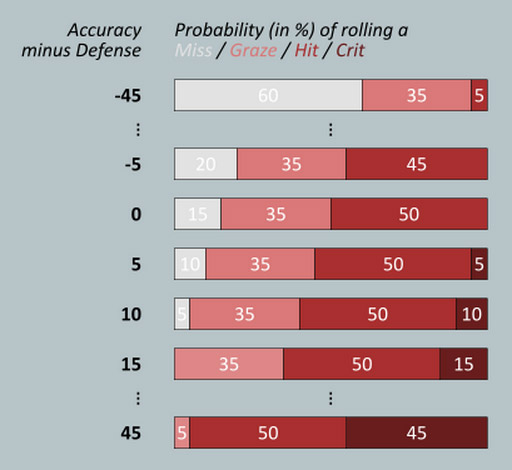 When damage is an element of an attack, it is always the thing that is modified. If it's a "flat" status attack(like a Stun), duration is modified.[3]

Certain classes have abilities that shift the default ranges for attack roll (e.g. rogues Dirty Fighting),[4] have inherent Accuracy bonuses (fighters had an inherent Accuracy bonus with all melee weapons early in development, was cut) and/or start out with an advantage in certain defenses (e.g. barbarians have higher starting Fortitude defense and rogues have higher starting Reflexes defense).[5]

Accuracy and defenses increase as you gain levels. The character defense is advancing uniformly every level for every class.[6] If you advance a level all defenses will increase by 3 points, regardless of what your class is.[7] On top of all this, both Accuracy and defenses can be boosted with Attributes, Abilities, Talents, spells and items.

Certain weapons, Abilities and Talents grant an additional roll after the accuracy roll that allows for the Outcome of an attack to be converted to a better one. Only ONE conversion can occur per attack, per "direction" (aggressive/defensive), meaning that it is NOT possible for a Graze to be converted to a Hit and then to a Critical.[8] Multiple bonuses to the same conversion type are additive, e.g. using a Flail with Confident Aim results in a 50% Chance to convert a Graze to a Hit. Conversion rolls also can be defensive, converting an incoming Attacks Outcome to the respective lower Tier.

Weapons with above mentioned Affixes:

Abilities that apply an aggressive buff with a conversion roll modifier:

Talents that grant a Passive conversion roll modifier (all aggressive):