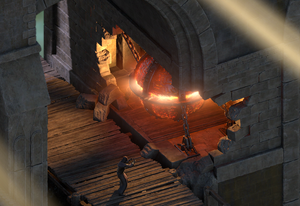 The Godhammer in the foundations of the Bridge.

Desperate to end the war and eliminate St. Waidwen, the Magranic clergy of Dyrwood developed a special bomb that was hidden beneath the Evon Dewer bridge at Halgot Citadel. The Godhammer Bomb combined both the magical prowess of twelve Magranic priests with the goddess' own power with conventional high explosives created with the aid of Rauatai's finest artillery specialist.[1] The bomb was fitted with a magical detonator consisting of an adra shard infused with a fragment of Waidwen's soul, suspended on copper spikes. This fuze would only detonate if Waidwen approached it, guaranteeing an explosion. An Illusion spell was cast over the bomb to conceal it.[2]

Twelve feet in diameter and filled with a variety of chemical and magical explosives, the Bomb was installed in the foundations of the bridge, while twelve Dyrwoodans volunteered to delay St. Waidwen on the bridge, declaring that he will not be able to cross it, hoping that the avatar's ego would drive him to prove them wrong. The ploy succeeded and Waidwen led a group of his elite soldiers to the bridge, attacking the gathered twelve as the Magranic priests and sappers prepared to detonate the bomb, channeling both spiritual and explosive energy to shatter Eothas. The ploy succeeded: Just as Waidwen finished killing eight of the gathered Dyrwoodan warriors, the Godhammer exploded, wiping out them, Waidwen, and a good fifty Readcerans. It was a simple matter to rout the remaining forces after the loss of their god.

Halgot Citadel was renamed Godhammer Citadel in honor of the event. Unbeknownst to all, however, Magran would slowly kill the priests responsible for turning the bomb into a weapon capable of wounding gods, killing them through a variety of means. The only one to evade this fate was Durance: Spiritual wounds sustained in the detonation warped his soul, rendering it impossible for Magran to locate it.