Please take a moment to fill out this survey on your gaming habits!

From Pillars of Eternity Wiki
(Redirected from God)
Jump to: navigation, search

Deities are widely recognized and worshiped in the world of Pillars of Eternity. 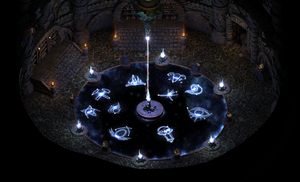 Communing with the gods in Teir Evron.

Gods of Eora are not gods in the traditional sense, rather, they are the artificial creation of Engwith, a society of high minds and broad concerns. In their time, every people worshiped its own gods, which inevitably led to religious warfare. The Engwithans sought an end to it after a series of devastating conflicts. They devoted all their energy to finding the true Creators. Generation after generation, they analyzed the fabric of the world and unlocked its secrets, mastering the science of animancy. One day they found an answer - except the answer was no answer at all. There were no gods to be found. Or if there ever were, they were gone. It was a terrible shock to them: If they could discover this on their own, how long until others would? How long before war and chaos reigned over a world without consequence? To prevent this scenario, they used their mastery of animancy to create their own gods to fill the void.[1]

Together with the ancient Huana of Ukaizo, they perfected the science of soul-making, eventually creating great artificial bodies of flesh and bone. Combined with a massive adra-powered machine at Sun in Shadow, they further to harness the souls of thousands of Engwithans assembled in the chamber - men and women, children and the elderly, all they could find - spawning the known pantheon. Each of them was crafted from an ideal, to give the kith not one, but many meanings to choose from in life.[2][3]

The surviving Engwithans then sent missionaries to the corners of the world to spread their faith. The missionaries knew the secret, but never revealed it to anyone. They refrained from marrying, voluntarily extinguishing their bloodlines to minimize the risk of exposure. The entire project was almost ruined when Iovara ix Ensios learned the truth, by accident, due to careless missionaries discussing the subject openly at one of their temples.[4] Her defiance and determination to expose the missionaries and their gods as fraudulent eventually coalesced into a popular movement that only grew bolder as the Inquisition formed and retaliated against Iovara and her followers - many of whom were former members of the missionary force. The size of the movement threatened to destroy the fledgling faith, until Thaos ix Arkannon, one of the authors of the divine project, captured her at Ossionus, destroying her body at the Court of Penitents and imprisoning her in the adra cells below around 800 AI, where she would remain for the next two thousand years, until the Watcher freed her in 2823 AI.[5]

The belief in the gods Engwithans created spread throughout the world, eventually becoming the one true faith of the kith of the world, and their nature successfully obfuscated by Thaos and the Leaden Key.

People worship many gods, but usually the ones who are most associated with their way of life; farmers may worship gods of light, growth or storms, while warriors might worship gods of battle or fortune. For some, this worship a matter of respect and tradition; they consider their deities to be their creators and they follow these gods because they believe that disrespecting these gods could bring dire consequences. For others, religious worship is a matter of karmic self-interest. Such individuals hope that their deity will favor them and place their soul in the body of someone who will live a good life. For such people, choosing not to worship is to risk spiritual confusion, aimlessness in the afterlife or ending up in the "lottery of souls" which will probably leave the individual's soul in a much worse state that it was before death. Beyond their primary deities, most people will say a prayer to the appropriate god when the circumstances are right; farmers will pray to a god of battle when their lands are invaded and warriors will pray to a god of growth when they're starving in the wilderness.

Sometimes the same god – or gods – may have a different identity in a different part of the world. The most notable example of this is the god of life and death, called Berath in Aedyran and Cirono in Vailian.[6]