This article is about previous residents of Eir Glanfatth. For language, see Engwithan language. 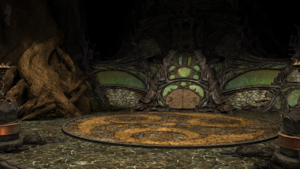 Engwithan people are the previous residents of Eir Glanfath. They apparently had a strong representation of every race in their society.[1]

Little is known about the long-lost Engwithan empire or its culture. Called the "Builders" by the tribes of Eir Glanfath, the Engwithans are believed to have created strange, elaborate structures over decades using shaped pillars of living adra to support the stone. Their language is barely understood by even the most well-read scholars, leaving many details of their society lost to the ages and hopelessly mired in rumor, folklore, and blatant lies.[2] It was, however, extremely individualistic, hierarchic, and violently opposed to any competing ideas, especially communal modes of living.[3]

With their origins around 100-200 AI, Engwithan society was organized into independent kingdoms ruled by tyrants. These absolute rulers enjoyed great power and wealth, with perhaps the greatest of them being Od Nua, controlling areas currently belonging to the Free Palatinate of Dyrwood. He went mad after the death of his son, Maros, because he knew there were no gods to ensure he would be properly reincarnated. He dedicated his life to carving a massive statue of his son out of living adra with the intention of drawing Maros' soul out of the Beyond by force. He engineered a massive statue of living adra to house Maros' soul, but his plans were stopped by the concerted efforts of other Engwithan tyrants, who saw him as a threat and buried him with his work.[4]

However, not all of it was lost: Advances in animancy that occurred under Od Nua's reign paved the way for mastery over souls. Centuries of research followed, fueled by religious wars that inspired the Engwithans to seek the answer to the greatest of their questions: Did gods exist? They devoted all their energy to finding the true Creators. Generation after generation, they prodded and worked the stitching of the world and unlocked its secrets. One day they found an answer - except the answer was no answer at all. There were no gods to be found. Or if there ever were, they were gone. Determined to fill in the gap and give meaning to the endless grinding of The Wheel, the Engwithans refocused on animancy and enlisted the aid of the mighty Huana empire of Ukaizo in their glorious pursuit. The plan was simple: Replace the thousands of false idols with just eleven that were no less false, but had the decisive advantage of actually existing.[5]

The Engwithans constructed a vast network of adra-powered soul machinery across the known world, from their capital in Sun in Shadow to the Deadfire Archipelago and Ukaizo. The former housed a crucible for the gods' creation, the latter a machine to grant Engwithans control over the Wheel. Over two millenia before the present years, Thaos ix Arkannon, chosen to be the steward of the gods, activated the machine beneath present-day Eir Glanfath, instantly sacrificing thousands of Engwithans - men and women, young and old, great and small - to imbue the machine with their souls. As their bodies crumbled to ash, their souls coalesced into a single whole, melting into the adra and merging with it, birthing the gods into Eora. Thaos ix Arkannon was selected by Engwithans to be the confidante of the gods and their queen, Woedica. He would spread the one true faith and work to prevent kith from realizing that the idols they worship are actually the creation of kith.[6][7]

The missionaries spread out from Eastern Reach and Deadfire Archipelago, the centers of Engwithan civilization. To protect the secrets of the gods, the missionaries swore oaths to die childless, so that their secrets would not be passed on. Coupled with the thousands of Engwithans who sacrificed themselves to create the gods, the Engwithan civilization slowly dispersed and died off. The religious strife caused by the accidental discovery of the secret by Iovara ix Ensios and the resulting brutal suppression of the "apostates" by the Inquisition further reduced Engwithan civilization, with perhaps the most lethal blow delivered by the gods themselves. To protect their secret, Ondra pulled Ionni Brathr from orbit onto Eora. The smallest of three moons would impact Eora and cause enough damage to the Reach and Deadfire to wipe out all traces of Engwithan civilization, but would not cause a global extinction event.

Abydon interfered in the plan, shattering the moon with his hammer and then shielding the Reach from the largest fragment with his own body. In sacrificing his corporeal body, the god of smiths ensured the survival of Engwithan cities, facilities, and their legacy. The last remaining Engwithans decided to protect the gods' secret by engineering a migration of folk, elves, and orlans from the North to present-day Eir Glanfath around 1300 AI. In return for the right to settle the derelict city around Teir Evron, the Engwithans (or Builders) demanded that Glanfathans protect the remnants of Engwith from foreign trespassers and never enter them themselves - save for the territory around Teir Evron.[8] This turned out to be a master stroke of social engineering, as protection of Engwithan ruins became an integral part of Glanfathan culture that endured for centuries and kept the secret of the gods safe. The Engwithans themselves faded into obscurity, save for the ruins they left in their wake.

Engwith was a society of high minds and broad concerns, though not alien to going to war against one another over matters of gods and religion. These traits enabled them not merely to achieve the heights of animancy, but also create the gods themselves.[9]

The Engwithans were good at three things: soul manipulation, mathematics, and growing large structures. Their metallurgy was generally unimpressive and they weren't particularly advanced in any other fields. Glanfathans have surpassed them in mathematical discoveries and astronomy. The other cultures have also discovered an enormous amount of knowledge about souls that the Engwithans never did—though there are still aspects of Engwithan technology that contemporary animancers don't understand.[10]

Notably, Engwithans pioneered the creation of animats, fusing warrior souls with bronze armor and weapons through the use of adra. Although Dyrwoodan and Vailian animancers have been creating their own constructs that exceed the capabilities of Engwithan creations, they never reach the sheer production scales that Engwithans were able to achieve at eg. Cliaban Rilag.[11]

They often used copper for their architecture and magical items, as copper is an especially strong binder for soul energy. Bronze alloys were also frequently used.

There are many Engwithan ruins, that can be found in Eir Glanfath. Known Ruins: