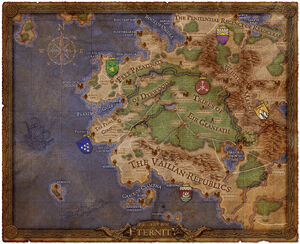 Map of the principal areas where Pillars of Eternity take place, roughly the size of Spain.

The Eastern Reach refers to a large peninsula on the western edge of the continent east of Aedyr, colonized by the Old Empires. Fraught by strife and warfare between the colonists and the settled peoples, the Reach eventually became the crucible of new powers on Eora: Dyrwood allied with Eir Glanfath and the Vailian Republics.