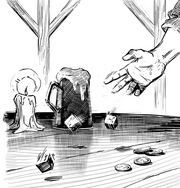 Dozens is a dice game in Pillars of Eternity. Popular with mercenary types and gamblers, it is commonly played throughout the inns and taverns of The Dyrwood. It is named after the faction of the same name. Dozens is most similar to the real-world dice game of Craps, though is heavily simplified in comparison.

It is one of two dialogue-based minigames in Pillars of Eternity, the other being Orlan's Head.

Each opponent rolls a set of three six-sided dice until they result in one of the rolls in the table below. If they roll "Talkers" (i.e. any combination that isn't listed), they must reroll. Once both players have a resulting roll, their "named" rolls (e.g. Towers, Godhammer, etc) are compared and the player with the best roll wins. If both players have the same roll (i.e. both Witnesses), the "value" of the roll is then compared, and the player with the highest value wins. In the case of a draw, the round is forfeit and the players may choose to play again. Typically the first player to win three rounds wins the game and takes the winnings.

Ordered from best to worst:

You can play Dozens at The Gréf's Rest Cellar in Stalwart Village [WM1]. Teanleycg, a local fisherman, is playing the game with a number of other patrons. You must put down

50 to begin playing (the option to play will be hidden if you don't have the coin). The first to three rounds wins

On the third win (in a row Verify) against Teanleycg, he'll pull a face and say he's out of money. You will earn Moderate Positive reputation with Stalwart, and the talent Dozens' Luck which converts +4% of incoming Crits to Hits. After this, you can no longer play Dozens.

Although the code for it is present, there is no means of starting a game of Dozens in Pillars of Eternity II: Deadfire.