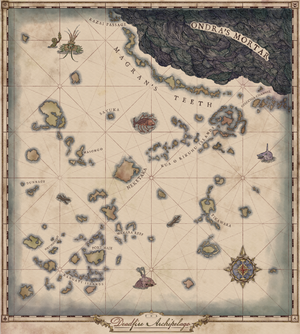 A map of the central part of the Archipelago.

The Deadfire Archipelago is a wide archipelago of volcanic islands (which give it the name), that is located far to the south of the Eastern Reach. Various nations and empires fight over the islands, to the east of which are sea monsters that invariably annihilate any ships that attempt to go exploring (many of them dwarven).[1]

The Deadfire Archipelago marks the eastern edge of the "Known World." Dominantly populated by island aumaua who make up the tribes of the Huana, the chain of hundreds of islands spans thousands of miles. The Deadfire contains myriad climates and biomes that are home to a bewildering array of creatures. The last century has brought ambitious colonial traders, explorers, and pirates to the Deadfire, but travel east of the archipelago is blocked by the destructive storms of Ondra's Mortar. Legends among the Huana speak of an ancient cataclysm that devastated their people thousands of years ago. Details of this event have been lost to time, but Huana storytellers claim that it destroyed everything they had built, sinking even the greatest of their cities beneath the waves.[2]

The Archipelago was left to its own devices for nearly three millenia, due to its remote location, the presence of sea monsters, and a particularly notorious Huana tribe, the warlike and xenophobic Wahaki. For over a century since Grand Vailia made contact with the Huana, they managed to keep outsiders away from the Archipelago, until a determined push by the future Principi sen Patrena, fleeing the empire's collapse, and a group of dwarven explorers that settled at Balefire Beacon in 2742 AI and forged the first trade relations with local Huana tribes. The relations continued until the dwarves fell prey to a combination of naga and undead attacks on the outpost. The last of the dwarves boarded up and abandoned the beacon, leaving for unknown fates, but the opening of trade relations would survive them, allowing for other powers to push into the Deadfire.[3]

Rauatai followed suit in 2758 AI, using the Royal Deadfire Company as its vanguard. Clashing with the Wahaki and the naga, the RDC prevailed against its foes, though at a substantial cost in men and materiel. The naga were particularly aggressive foes, capable of slithering by the hundreds onto the decks of RDC ships, though the superiority of Rauataian firearms decimated their numbers and eventually forced them into retreat. The Wahaki proved to be much more difficult foes. In the same year that the campaign launched, the tribe clashed with the RDC. The bloody conflict came to a head at Nakaro Atoll, where Rauatai's warships decimated the tribal force. In the aftermath, the Huana crown dispatched watershapers to sink Rauatai's most prized vessel, the Tenets of Iron, as a reprisal and a demonstration of power, leading to the subsequent revitalization of the Watershapers guild.[3]

Coupled with the revitalization of the Watershapers Guild, this forced the RDC to engage in diplomacy with the Huana and give their lands a wide berth. While the Vailian Trading Company continued its expansion across Deadfire through a combination of intimidation and manipulation, primarily by exploiting the unfamiliarity of Huana with the concept of land ownership as understood in the west. Rauatai instead chose to focus on uninhabited or uncharted islands, most of all Hasongo. In 2818 AI, after extirpating the naga population, the colony was established and rapidly became a key stopover point on the journey to the empire, exporting much needed foodstufs.[3]

The real turning point for the Archipelago came in 2819 AI, when the properties of luminous adra were discovered and the Vailian Republics began aggressively exploiting the riches of the region, seeking to corner the market. The Archipelago became a core element of the economy for the Republics and Rauatai, a potential home for the Principi sen Patrena that crossed it for nearly 150 years, and the endangered domain of the Huana, creating a volatile situation perched precariously on the edge of full-blown war. The arrival of the reincarnated Eothas in 2828 AI resulted in a dramatic collapse of the balance of power, plunging Deadfire into a conflict for domination between the four powers.[3]