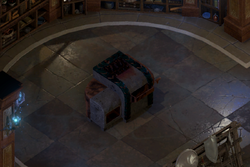 The machine in The Dark Cupboard

The Critter Cleaver is a feature in Pillars of Eternity II: Deadfire, added in Patch 4.0, alongside The Forgotten Sanctum. It adds a peculiar machine to The Dark Cupboard in Periki's Overlook, Neketaka, which gives you the ability to create new and exciting pets with your existing ones.

After installing The Forgotten Sanctum, you will receive a missive from a fellow pet collector, describing a newfound solution to the problem of having too many pets, and not enough affection to go around.

The machine itself is of Engwithan origin. Having recently been yanked from an Engwithan dig site, it has been restored to working order.

How it works[edit | edit source]

Interacting with the machine gives you the option to sacrifice your pets. When a pet is - rather gruesomely - sacrificed, the machine "remembers" its appearance and bonuses, allowing you to create a new pet by combining stats of one and the appearance of another, in addition to naming it. Once a pet is sacrificed, the machine remembers it permanently, so you can create as many copies of it as you like, given you have the coin. Creating a pet with no bonuses costs

1,000, while adding bonuses will cost

Your newly-created furry friend will have a value of

0, and the following description: