From Pillars of Eternity Wiki
(Redirected from Companion)
Jump to: navigation, search

A Party is a group of adventurers and companions who will accompany the players through the world of Eora. In Pillars of Eternity, Players can travel through the game world with up to 5 followers. At the beginning you create only your own character, the rest must be added during your adventures. You can do that in two ways. First hire adventurers at the Adventurer's Hall or inn. Second recruit companions met while exploring the game world. There are eight such companions in the game, raised to 10 and 11 in Part I and Part II of The White March expansion, respectively. Each of them has their own unique history, personality and goal they want to achieve. After a character joins your group, you gain complete control over them, you can give them orders, change their equipment or pick skills and talents after gaining a level. Beware, all party members can die permanently. 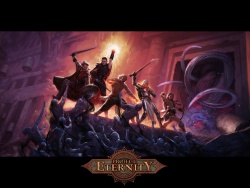 The companions are designed with distinct personalities, voices, character arcs, and lots of reactivity. The Companions cover many of the races, classes, and cultures and will help the setting come alive and hopefully become a place players will find themselves wanting to stay awhile. Each companion, in a sense, becomes an ambassador for his or her race, culture, and class. They have a driving interest in the player's central conflict and are influenced by player-character background and the ongoing decisions. They have their own mini-arc and quest woven into the game, which will be affected based on the player's decisions and interactions with them. Like the player the companions will also have a wide range of endings based on the player's decisions and interactions with them.[2][3]

Since all party members can die permanently, it's possible to create and hire adventurers in the the Adventurer's Hall if you run out of companions, but these characters won't have developed background stories, personalities and dialogue.

Custom adventurers can be created by hiring them from any inn. These customized party members won't have the same depth of characterization and writing as the companions, but the option exists to prevent players from being stuck with party members they don't enjoy and to allow players to experiment with unusual party configurations (such as a party composed entirely of warriors or healers, which Obsidian stated is something they want to support as much as possible).

You can hire up to 8 adventurers, it is the easiest and quickest way to increase size of your party. To do so you must find an inn - there is at least one in every village and city -- and talk with the innkeeper, he will allow you to recruit an adventurer. Maximum level of adventurer that you can recruit depends on your main character level, it is one point lower. For every adventurer level you pay 250 coins, which means that if you recruit character on eight level, you must pay 2000 for him. 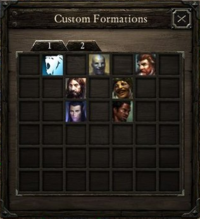