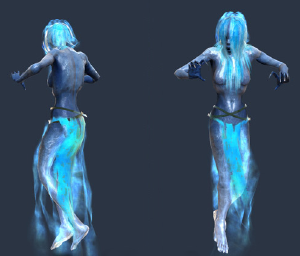 Cean Gŵla (pronunciation: KEN GOO-lah[1]) are a race of creatures in Pillars of Eternity.

Cean Gŵla are violent and confused spirits that have been unable or unwilling to move beyond the Shroud. More specifically, these are the spirits of women who die under particularly tragic or traumatic circumstances, hence the name "cean gŵla," which translates to "blood mother." The popular image of the cean gŵla as the spirit of a jilted lover has changed in recent years, as the effects of Waidwen's Legacy have become more widely known. With so many Hollowborn arising and a similarly steep rise in cean gŵla sightings, many assume these spirits are linked to mothers who have died in childbirth. In reality, the Cean Gŵla manifest just as readily from the spirits of women who perished in violent crimes or accidents, or those who led particularly violent lives.