Bounty: Naroc the Prophet is a bounty in Pillars of Eternity.

The bounty's for Naroc the Prophet, a Glanfathan exile. He was banished from his tribe for his, ah, extreme views. Naroc's a cipher, and it seems like he's taken an interest in an Engwithan site north of Gilded Vale - Cilant Lis. Several tribes have pooled together the coin for his bounty - they say they don't want him tampering with some 'machine' out there.

Speak to Warden Fyrgen in the restored Warden's Lodge in Caed Nua and accept this tier-4 bounty task. He'll only offer it to you after you have completed all of his tier-3 bounties:

Once you have the task, travel to Cilant Lîs (the outdoor area where you became a Watcher at the start of the game), and walk a few steps forward towards the Engwithan machine.
Naroc the Prophet (a 12th level cipher) and his party hide out there, and attack as soon as they see you:

Defeat them, and pick up his head from the bodies (1962 party experience). Naroc also drops a Stag Helm and the unique breastplate Elardh Dwr.

Bring the head back to Warden Fyrgen at Caed Nua to collect your reward. (2500 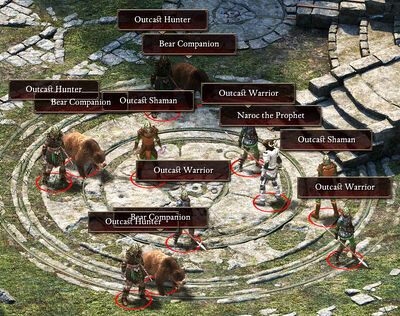