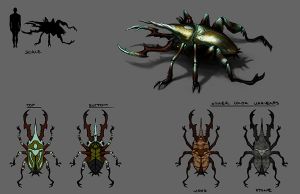 Concept of an Adra Beetle

Beetles are a race of creatures in Pillars of Eternity. There are three known variants stone beetle, wood beetle and adra beetle.

Beetles are not quite man-sized, but they strike a sufficiently intimidating form to frighten off most adventurers. The alarmingly large insects never fail to impress and terrify visitors, and reinforce the image of the Dyrwood as a barely civilized backwater. The expansive wilderness in and around Dyrwood (and Eir Glanfath) gives beetles plenty of room to multiply. The most successful species of large beetle have evolved to not only camouflage themselves in the surrounding environment, but also to grow carapaces made out of common and hardy materials (e.g. wood, stone, adra). Glanfathan tribes have been known to fashion crude shields and even weapons out of the limbs and shells of these beetles.

All appearances to the contrary, there is an underlying complexity to the common beetle. When they choose a material with which to develop their shell, they do so with a level of intention that borders on artistry. Wood beetles will often burrow intricate holes in their carapaces. They blow air through these makeshift pan pipes, and play a ghostly music to attract mates. Stone beetles fashion rudimentary tusks and horns that have the advantage on their prey. The function of adra beetles is as of yet unknown, save that they are notoriously difficult to kill.