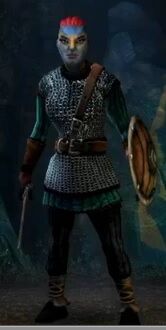 Aumaua are one of the civilized races that inhabit Eora. There is great ethnic diversity between Aumaua in different regions of the world. In Pillars of Eternity two sub-races of Aumaua appear, namely Island aumaua and Coastal aumaua.

The aumaua are a race of large, semiaquatic humanoids with a diverse array of skin patterns, elongated heads, and semi-webbed hands and feet.[1] Aumaua originated and typically live and work in warm oceanic climates. Though they are not the most widely traveled racial group in the world (that distinction belongs to Calabandran humans), they have been some of the earliest long-range coastal explorers in the world, exploring and settling continuously for the longest period of time, over 20,000 years. During that time they had a lot of contact with other races.[2]

The aumaua-dominated cultures to the (far) north and (slightly closer) south are about as technologically-advanced as the Aedyr Empire.[3] Including Rauatai. Aumaua are a minority in all of the "core" nations/cultures around the Dyrwood. Aumaua living near the Dyrwood have stylistic visual elements taken from Japanese and various Polynesian cultures, but their cultures themselves are not based on Japan, Samoa, Maori etc.[4]

They are physically distinct from other races due to their towering size, “inverted triangle” physique, odd skin and hair coloration and textures, and head shape. Aumaua natural lifespans are typically between 70 and 115 years.[2]

Northern aumaua live in a conquered mainland region, mostly along the coast of the northern hemisphere - lands they conquered by pushing Thyrtan, Natlan, and orlan communities out. While physiologically similar to their Island cousins, the coloration of Coastal Aumaua is starkly different - blue and green. Their culture is more centralized and urban than their island cousins, though both groups are involved in seafaring. Coastal Aumaua are very rare in the Dyrwood, and as the result of an ancient campaign in the northern continent, people in the Dyrwood tend to associate the coastal aumaua with a more aggressive warlike reputation. This is not entirely accurate. However, it has led to a self-fulfilling prophecy whereby many coastal aumaua in Dyrwood are mercenaries, bodyguards, or soldiers.[2]

Southern Island Aumaua, originated in the Deadfire Archipelago a thousand miles south of the Vailian Republics. While physiologically similar to their coastal cousins, the coloration of Island Aumaua is starkly different - brown and yellow. Though still uncommon in the Dyrwood and surrounding environments, Island Aumaua are more commonly encountered there than Coastal Aumaua, who are quite rare. When encountered around the Dyrwood, they are often laborers, fishermen, or sailors.

Aumaua are known for their "great strength" and gain:

In addition, each aumauan sub-race gains a different racial ability:

In Pillars of Eternity II: Deadfire[edit]