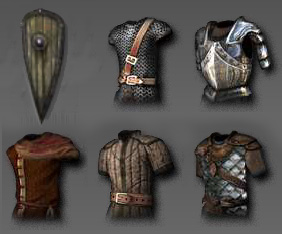 Armor encompasses all items a character may wear, that provide the wearer defensive bonuses during combat, particularly increasing its Damage Reduction (DR). There are several types of armor and shields available, each armor type has three quality levels: normal, fine, and exquisite. Armor is worn in the body slot, while shields used as part of Weapons sets.[1]

There are no restrictions on what armor or shield characters can use, but the mechanics of classes may lend themselves better to certain weights. E.g., many monk abilities (both active and passive) are powered by Wounds. You acquire Wounds by taking damage, after armor. Several monk and barbarian abilities are effective for a certain amount of time rather than a certain number of attacks, which encourages faster attacks -- both from the choice of weapon and from a lower armor speed penalty. Paladins have more targeted-use abilities and "Zealous" auras but are not especially durable. I.e., the party gains the most benefit from having them on the front lines, but they do not need to be especially fast-acting, so heavier armor often makes more sense for them.[2]

Every type of armor has a single base Damage Reduction rating, and several strengths and weaknesses against certain Damage Types, which would affect its effectiveness(DR) against such attacks. [3] Additional protections may be added through crafting. Armor with higher DR comes with some drawbacks however, as the heavier armors correlates with speed penalties affecting action speed.

The dev team were consciously trying to capture a late 80s-late 90s AD&D aesthetic with a lot of armor sets e.g. the "high fantasy" armor looks similar to Dungeons and Dragons Concept art from Larry Elmore and Keith Parkinson except the women, who often wore little of anything in those concept art. Mostly realistic armor, but with some features exaggerated. Due to the size of characters, some elements needs to be exaggerated or they just disappear. E.g. the scales on the scale armor are pretty large and the same is true for the rings on the mail armor.[4]