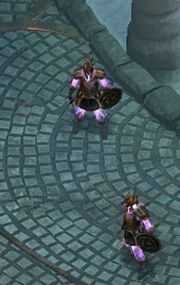 Animat are a race of creatures in Pillars of Eternity.

They are metal automatons made when souls are extracted from warriors and fused with bronze armor.[1] They were created by Engwithans and have limited memory and consciousness.[2]

Animats were initially created to serve as guardians for royal tombs. Their earliest creators bound the souls of their strongest warriors and servants to intricate sculptures, made of various materials in accordance to the rank of the soul captured within. As the knowledge of the technique for this process became more widespread, powerful animancers started creating their own animats to serve as personal guardians, using whatever weapons and materials lay at hand.

Animats can only be created through the use of loyal souls that hold a powerful dedication to protecting their charges. While the ritual to create them can still be performed upon unwilling subjects, a lack of resolve in a participant's soul can result in abominations which immediately attempt to destroy themselves in a violent manner, often inflicting collateral damage in the process. Even successful creations remain vulnerable to the onset of doubt, and most animat creators take great care not to allow such doubts to manifest.