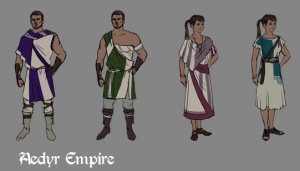 ConceptArt of humans from the Aedyr Empire

"Aedyr" literally translates as "Many Deer", but means "People of the Deer", referring to a 2,500 year-old human tribe known for its deer hunters, that became a kingdom 600 years ago. Two centuries later in 2399 AI, the Aedyr kingdom united with the elven kingdom of Kulklin, forming the Aedyr Empire. Following a long war among the two kingdoms which was brought about by an Elven noble, St. Elcga.[1]

Prior to arriving in their current home, the Aedyrans migrated south over many centuries. Among the Aedyrans, there is no significant cultural divide between humans and elves. Because of their close contact and integration in spite of physiological differences (such as longer elven lifespans), their culture and legal system have developed a variety of unique concepts such as the haemneg, or ceremonial marriage.

Ethnic Aedyr (mostly Meadow humans and Wood elves) have fair skin and a variety of hair and eye colors, with blue and green being common. Among other cultures, Aedyr clothing is known for being relatively simple in construction and often using large, colorful striped or checkered patterns for accents.[2][3]