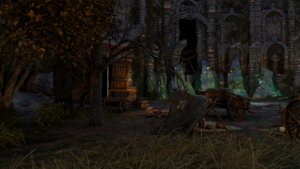 Pillars of adra can be seen in the background, growing through the ground in front of Cilant Lis. 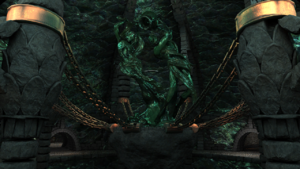 A massive sculpture of Berath created by Engwithans at Cliaban Rilag, example of their skill and the malleability of the material.

Adra is a unique material found across Eora.

An organic material crystalline in structure but shell-like in substance, adra can be found growing up through the ground in veins in many parts of Eora in massive pillars. Adra pillars are believed to be interconnected into a single giant network that reaches deep beneath the surface of Eora, but this has never been conclusively proven due to the lack of necessary technology. Adra is particularly abundant in the Eastern Reach and the Deadfire, both of which were homes of Engwith, a long-lost civilization.[1]

Adra is overall very easy to carve and manipulate, it is a favorite of jewelers as a semiprecious stone, and is often cut more intricately and beautifully than other gems.[2] However, its true potential lies in its unique properties tied to the soul. The material acts as a conduit for souls, both capable of storing and transporting them over vast distances. With the right technology, adra can be used to even manipulate souls, from transferring them to animats and constructs to redirecting, binding, and even destroying them on a vast scale. Engwithans were masters of this art, as well as cultivating and shaping adra. In fact, their cities used it as a core element of their architecture, mixing it with layered stone, while craftsmen used it for a staggering amount of purposes, including armor, weapons, aforementioned animancy, decoration, and more.[3] Abydon, the god of smithing created by the Engwithans, also leverage the properties of adra in creating the White Forge. Its soul-channeling properties were later leveraged by the Pargrunen dwarves in the creation of Durgan steel.[4]

In modern times, Adra remains a popular choice among craftsmen for its malleability and among animancy practicioners for its soul-related properties. Glanfathans even use adra bordered with copper as a unique form of currency, called adra eniach, having inherited the techniques of creating them from the Engwithans.[5] However, the real potential of adra can only be unlocked through the use of luminous adra, an unique form found only in the Deadfire.[1]

Luminous or living adra is an unique and tremendously powerful form of the material found in the Deadfire, rising through the ground in the same iconic pillars as the one found in the Eastern Reach and elsewhere. Vast reefs are known to exist across the archipelago, with ships running aground on them with disturbing regularity. Long believed to be just a curiosity, differing from regular adra only in the ethereal light it gives off, it wasn't until 2818 AI that interest in it - and Deadfire - picked up.[1]

The driving force behind this was its expansive capacity for soul energy. A single shard could hold as much power as a wagon loaded with regular adra and the first tentative studies by animancers allowed animancy research to explode in the years following the Hollowing of the Dyrwood. Studying previously unheard-of volumes of soul energy, animancy could make dramatic leaps forward as a science, allowing for the creation of reliable constructs (previously limited to the most eccentric of animancers with access to human souls), machines capable of harnessing the power of the soul, and allowing regular kith to glimpse forces normally beyond their perception - a trait previously restricted to Watchers. Given that adra formations have a connection to each other, across the In-Between, a group of researchers under Flaune Elette proposed that it could be possible to transport kith long distance by harnessing this energy and opening portals to the In-Between, revolutionizing travel and transportation for the VTC.[6]

Furthermore, luminous adra is a prized commodity, as when distilled into a liquid form it becomes a panaceum: Capable of restoring vigor, health, and youthfulness to anyone who uses it, while supercharging their souls, making them ten times as vibrant as those of ordinary kith. Animancers are not sure of the ultimate effect of luminous adra on the souls or the impact of its use on reincarnation and Berath's Wheel. That doesn't stop kith from consuming it in ever growing quantities, both in liquid form and smoked in tobacco and svef pipes.[1]

Although animancers insist on caution and restraint, the dangers of luminous adra are commonly ignored, even as early adopters begin to exhibit strange behavior commonly ascribed to elder Awakened or disturbed Watchers: Conversing with ghosts, detachment from reality, and regression into past lives. The dominant theory posits that by ingesting adra, recreational users are experiencing echoes of other people's lives or otherwise unwittingly entering the spirit world without the necessary bracing.[1]

No matter the dangers, luminous adra became one of the most prized and sought-after commodities. As it is commonly found in the Deadfire and only in modest quantities elsewhere, this made the Archipelago a high priority target for the mercantile, militarized Vailian Trading Company, which seeks to corner the market on adra, with or without the cooperation of the native Huana, who consider themselves its ancient guardians. It is not a strategic objective of either the Royal Deadfire Company or the Príncipi sen Patrena, though that does not mean they are not interested in profiting from the trade.[1]