A Bigger Fish is a quest in Pillars of Eternity II: Deadfire.

Martino wants a group of Royal Deadfire Company sailors ousted from the Wild Mare in Queen's Berth. He seemed to favor a permanent solution. 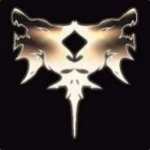